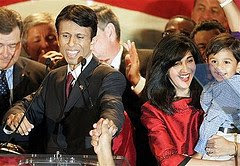 I came across this guy a while ago. In October 2007 he was elected the USA's first 'Indian-American' governor. At age 36, Jindal became the youngest current governor in the United States.

Significantly, there was also speculation, pre-Palin, that Jindal was a possible choice for the Republican vice-presidential nomination in 2008. Was this in one of the USA's more 'liberal', urban or cosmopolitan states? Non, it was in the deeply conservative south state of Louisiana. I was reminded of him recently because this article appeared this month in the New Statesman journal. It opens:

Bobby Jindal talks too fast. That, both admirers and detractors agree, is the most noticeable flaw in the impressive presentation he offers as the first Indian-American governor and perhaps the best prospect for revitalising a Republican Party that has just started its tour of the wilderness, with little else to keep it going other than the sustenance provided by occasional caribou kills by its new folk hero, Sarah Palin.

Why should Jindal matter? With the current interest in glass-ceiling breaking politicians he will naturally be another Obama-like curiosity. However, Jindal's politics neither sit right with traditionally minority-supporting 'progressive' types nor does his chosen/adopted identity court those who might have felt some tribal pride about his election. You see, Jindal, (whose parents were Indian Hindu-Punjabi immigrants to the USA in the 1970s), chose to convert to Roman Catholicism and thereby, some would say, eschew his heritage. Although born and raised a Hindu, it was during his high school year that he chose to convert to Catholicism.

Even if one could accept this rather unusual conversion as 'each to his own', it has to be said that his brand of politics is pretty unsavoury - he opposes all abortion and stem cell research and the legalization of same-sex marriage whilst supporting pro-gun laws and teaching creationism in schools, just to pick a few highlights. In fact, as another blogger commented at the time of Jindal's election, 'he’s a crazy Republican nut'. Strange, but worth mentioning, I thought.
Posted by Raven Raven at 21:11 No comments: