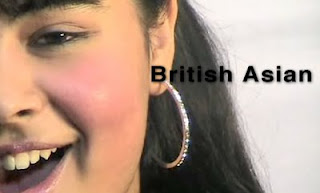 Yes, a whole TV programme comprised completely of ... brown people, and it's not comedy. 'British Asian' is the (admittedly rather uninspired) name of a programme showing on the 'Community channel' (on Freeview, channel 87). It's a programme, which:

... made by six teenagers from Sheffield, offers a fresh and direct look at multicultural Britain through the eyes of young British Asians of Indian, Pakistani and Bangladeshi heritage.

A wide range of people, young and old, talk openly on the subjects of integration, culture, work, racism and religion.

They explore the growth of opportunities, the mixing of two cultures and what each generation has learnt from their experiences.

The film British Asian highlights the history of South Asian immigration to Britain and the changing expectations and ideas of young British Asians compared to those of their parents and grandparents generations, who came to Britain after the Second World War.

The programme features a number of interviewees talking to camera with virtually no on-screen intervention. Despite this beginning to seem a little monotonous at times, stick with it, and the skill, focus and articulation of the youngsters shows through, giving us an honest and refreshing half-hour with few slick-production bells and whistles. It's the same reason I enjoy listening to some pirate stations occasionally - it's the unmediated, unresearched and unmanipulated honesty of it all.

Many of the interviewees of 'British Asian' are northern folk, but one of the talking heads (a young Asian man brought up in Norfolk for godsakes, poor bloke) tells the story of how 'in the early days' , when he and his brother were walking down the street, such an unfamiliar sight were brown people, that they saw a car crash into a lampost whilst its driver craned his neck to stare at them!

Just thought I'd mention this little known programme - you might want to check it out - it's showing on the Community Channel during July, as part of their Meet the Future month, at the times listed here.
Posted by Raven Raven at 23:15 1 comment:

Navid Akhtar examines the influence of Islamic design and values on the life of the Victorian designer, poet, craftsman and socialist radical William Morris.

Morris was inspired by Turkish ceramics and Persian carpets to create a new movement in British design. For him, the Muslim world had managed to preserve the art of the craftsman and avoid the ills of industrial production. He espoused the philosophy that art should be affordable and hand made; this was already a reality in the Islamic world.

Not stopping at arts and crafts, he was a passionate advocate of social utopianism and believed in the rights of the worker. Today, these ideals have profoundly influenced a new generation of British-born Muslim artists, as they rediscover Morris and look to his artistic work and socialist ideas for inspiration.

The connection had never before occurred to me though when you think about William Morris' designs, it seems obvious. But it's also intriguing (perhaps more so) that he was interested in 'the Muslim world' in relation to his own socialist beliefs. If you miss the broadcast slot, then you will probably be able to catch it afterwards on the R4 'listen again' site.