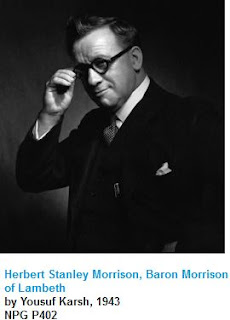 The National Portrait Gallery are currently showing an exhibition about a local boy. No, not Boy George, or Bob Hope, but Herbert Morrison:


"This display explores the portrait imagery associated with Herbert Morrison (1888-1965), one of the key political figures of the mid-twentieth century, who helped engineer the emergence of the Labour Party as a leading parliamentary force. Taking as its theme the idea that Morrison’s political character was defined by his reputation as an archetypal Londoner, the display looks at how his public profile and political persona were similarly shaped by his cockney identity....." Continue reading at NPG website.

Herbert Morrison (1888–1965), born in Lambeth, was a  Labour Cabinet minister and leader of London County Council. He is often quoted now as being the "chief sponsor of the Festival of Britain," and of course the grandfather of Labour politician Peter Mandelson, ex-cabinet minister, made a peer in 2008.

The local connection is that in 1923 the then "rising politician Herbert Morrison moved to 272 Well Hall Road, now No. 352, where he stayed with his family until 1929 on removal to Archery Road, Eltham" until 1960. [credit: John Kennet]

There's some interesting British Pathe footage of "Herbert Morrison and Mrs Morrison posing for cameras at Eltham" and "coming out of Polling station" but I'm not sure where (or even which year?) .....
Posted by Raven Raven at 11:46 No comments:

Art exhibition at the Woodnut Cafe

News has reached me of an exhibition at the new-ish Woodnut Cafe on Westmount Road, Eltham.

Artist Bichelle Masrani is exhibiting at the Woodnut Cafe which is described by Spot on Art as "a contemporary, stylish place to relax in leafy Eltham". Sounds good to me. Not sure how long the exhibition is on for though.

We've not popped in yet - the children are desperate to try the cakes and hot chocolate at this cosy little place (which is a couple of doors away from Ayres the bakers).

You can see more of Masrani's work here.
Posted by Raven Raven at 09:00 No comments:

The details are now out:


"On 17 November 2011, Eltham Lights Up will see Eltham town centre transformed with lights and colour to celebrate the start of the festive season.

Eltham High Street will be closed to traffic between 4pm and 8pm, with street performers and a live music stage providing entertainment from 4.30pm.

At 6pm the street's Christmas lights will be switched on, followed by a spectacular lantern-lit procession featuring hundreds of local school children, a giant mechanical character and other special effects....."
Read more...

I've not heard of them, but if you're in Eltham High Street this Saturday, here's a tweet about an event there, all for a good cause:

Co-incidently, following on from my last post on Blitz archaeology in Eltham, this piece appeared in yesterday's Telegraph about a woman who:

"... lived in Sydenham – an area of south-east London severely damaged by Hitler's V1 and V2 rockets. Bombs had exploded around her childhood home. Many a long and terrifying night had been spent in the air-raid shelter."

It's a touching story by a son about how his mother came to terms with a nation which she had for so long perceived as the enemy.
Posted by Raven Raven at 09:45 1 comment:

"Pics from brill bit of local history, Blitz archaeology walk in Eltham Green, shame @BBCLondon949 for poor plug not giving the details, only 3 other people were at the 3pm tour. Starts opposite Macdonalds, follows detail road plan from recently unearthed records in the Greenwich Heritage Centre."

The event in question was an Archaeological survey (9.30am) and a walk (3pm) on the Page Estate in Eltham Green described as follows: 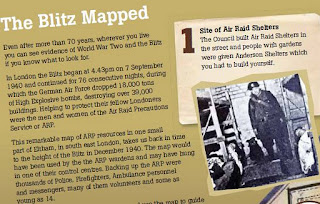 "We are launching a self guide map and fact sheet, put together with the support of the team at BBC Hands on History, on the ARP Service on the Page Estate. We will be carrying out a formal archaeological survey of the items on the map, recording and photographing those which are still there and looking for other evidence of the Blitz. We hope to the work will also lead to us meeting more local people with information about the period and people named in the map."  The BBC also put together this Hands on History guide. (extract right)


More photos by @Lee SE12 from the Blitz walk in Eltham Green this afternoon can be seen at twitpic.com/6tix5f   twitpic.com/6tiq1n  twitpic.com/6tit6u
This is certainly an event in which local schools might be interested - last year my daughter's primary school class was 'evacuated' via Eltham station for a couple of nights to a centre (in Herts) where they experienced the wartime life of evacuated children (all done in an age-appropriate way, of course!).

UPDATE:  I spoke too soon  - the organisers DO do work with local schools and had apparently done so that day - fab. And more: the item was plugged on BBC London in the morning with a reporter even talking to organisers onsite in Eltham, however they didn't have a chance to give all the details and also said Erith by accident. The 11am/1pm walks were well attended apparently (thanks for info @Lee SE12). It sounds a good project and it is great to have our local area's history mapped in this way, so well done.
Posted by Raven Raven at 00:24 No comments:


2 October 2011–25 February 2012
Traders Unpacked Season
A new gallery at the National Maritime Museum explores the history and continuing relevance of Britain’s trade with Asia, looking at this compelling story through the lens of the East India Company. Traders: the East India Company and Asia examines the commodities that the Company traded, the people that shaped its tumultuous career and the conflicts and rebellions that were its ultimate undoing. Check out the fantastic range of events going on http://www.nmm.ac.uk/visit/exhibitions/traders/traders-unpacked/
at National Maritime Museum, Romney Road, Greenwich, London SE10 9NF


4 October 2011
Museum Gallery Tour, Hall Place and Gardens, Bexley
2.30pm.
Join the Bexley Heritage Trust curatorial team for a tour that explores the new Museum galleries at Hall Place. You can ask questions and find out what it takes to look after Museum objects. Charges apply. Tickets must be booked in advance on 01322 621 238.


Sat 8 October 2011
10.30am to 4.30pm at Eltham United Reformed Church
Annual Meccano Model Show in Eltham by the South East London Meccano Club.
A great day out for all the family. The hall will be packed with working Meccano models - trains, planes, cranes and more. There will be a raffle with Meccano prizes. You can buy Meccano sets and parts from the Meccano dealer. Refreshments available all day.
Meccano Show 2011 website

Sun 9 October 2011
London Regatta 2011
10am to mid-afternoon, subject to weather conditions.
London's largest sailing event of the year at Greenwich Yacht Club.
The annual test closure of the Thames Barrier will create non-tidal conditions on the up-river side towards London. This temporary removal of the effects of the tide provides a rare occasion for dinghy sailors to compete in open water without needing qualifications or tidal water experience. Over 60 boats of various types representing sailing clubs across the capital will take part. The first race will start at 10am on four courses marked out between the Thames Barrier and the O2 Arena. Presentation of awards is expected to take place mid-afternoon. Directions foir spectators can be found at www.greenwichyachtclub.co.uk/directions. Public entry to Greenwich Yacht Club on the day is free.   Greenwich Yacht Club, Peartree Way, London SE10 0BW
More details can be found at www.greenwichyachtclub.co.uk

1.  Deacons For Defense
at Goldsmiths University of London Lewisham
Screening of a film which explores a little known but true aspect of the American civil rights movement. Starring Forest Whittaker and Ossie Davis.
(conflicting date information around - check with Goldsmiths Student Union)

2.  Alex Wheatle: Uprising
The Albany Centre and Theatre
11 Oct to 14 Oct, 7.30pm
Marking the 30th anniversary of the Brixton riots, award-winning author Alex Wheatle presents his autobiographical story of how he became a writer.


Fridays 14 October, 28 October, 25 November
Friday Night Curry and a Pint
19.30–21.30, £25
Discover the origins of the ‘Great British curry’, the story behind India Pale Ale and how the East India Company changed the eating and drinking habits of a nation. An evening of masala, manuscripts and migrations that is guaranteed to stimulate the imagination and the taste buds. Speaking on this series of unique learning and dining events, will be historian Rozina Visram, Shrabani Basu, author of Curry: The Story of the Nation’s Favourite Dish and the beer writer and convivial raconteur, Peter Haydon. Ticket price includes a delicious Indian meal and a pint of India Pale Ale.


starting Wed 19 October, for various dates
Hair
Bob Hope Theatre, Wythfield Road, Eltham
The American Tribal Love-Rock Musical HAIR tells the story of the "tribe", a group of politically active, long-haired hippies of the "Age of Aquarius" living a bohemian life in New York City and fighting against conscription into the Vietnam War. Let the Sunshine in !!!!  7:30pm
Contact Details: www.bobhopetheatre.co.uk or 020 8850 3702 or http://www.eldoradomusicalproductions.co.uk/


Wednesday 19 October 2011
7.30pm
The Mayor of Lewisham is hosting a curry evening at the award-winning Babur restaurant, 119 Brockley Rise, Honor Oak, SE23 1JP. Tickets cost £25 per person and includes a superb three-course meal as well as a donation to the Lavender Trust at Breast Cancer Care. This is a popular annual event so booking is essential. To make your reservation contact Derek Johnson on 020 8314 8636.


Sunday 23 October
Apple Day, 11am-4pm, FREE ENTRY.
Woodlands Farm, Shooters Hill
All are welcome at the Woodlands Farm Trust Apple Day. Come and celebrate National Apple Day with a variety of activities, including crafts, a treasure hunt, archery, face-painting, and pressing apples to make juice. There will be stalls selling local produce, including farm honey and home-made jams and cakes. A great day out for all the family. Entry is free, but donations are welcome – all money raised helps us to care for our animals.