The debate has been a amusing diversion from the general works to improve the High Street running through the south-east London suburban town. The works are part of a £6.6m improvement scheme as part of Greenwich Council's regeneration masterplan for the town centre, a scheme primarily funded by Transport for London.

The stripes on the crossings, which started appearing this month, are either 'puzzling' and 'going the wrong way' or 'funky' and 'splendid' depending on your point of view. Some worried that absent-minded road-crossers might mistake this pelican crossing for a zebra crossing. There was also speculation about what the 'E' might mean - did it intend to pick up on Eltham Palace designs?

Others joked that the markings outside the library signaled free wi-fi: 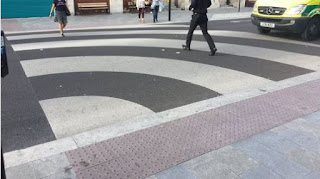 However, Greenwich Council explained that the novel markings were intended to link the two sides of the High Street in a more user-friendly way and not merely be a 'corridor for motorists.'

Bizarrely, this hot topic even managed to feature in a Daily Fail piece: 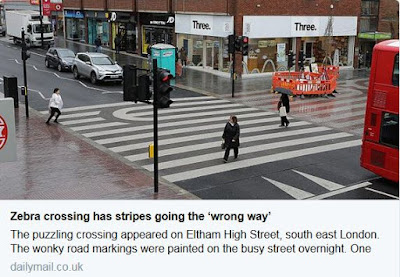 Personally, I rather like the new crossings.
Posted by Raven Raven at 09:51 No comments: