Trying to find a free copy of the local NewShopper?

I know we're all online now but if you prefer something to flick through and if you don't get a delivery of your local NewShopper, I've just seen that you can apparently pick up a free copy of the Lewisham edition at the following places around Eltham:

More information on other pick up sites and editions on their website here.
Posted by Raven Raven at 08:00 No comments:

New Cross on a wet Sunday

Random photo time...
Dropped into the Goldsmiths Undergraduate Art degree exhibition last Sunday and got the opportunity to take this shot from the Ben Pimlott Building (yes, the building with the big metal scribble on the roof). It looks out over where New Cross Road meets St James's on one side, and Goodwood Road on the other. The back of the old Deptford Town Hall building, currently scaffolded, is visible on the right edge, with the Shard and its tall London skyline comrades in the distance: 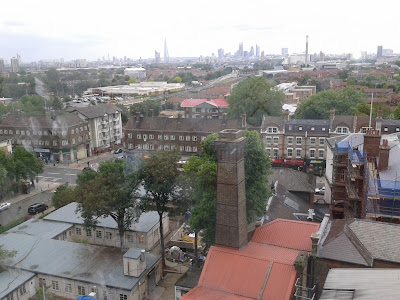 Later we ambled down to the building which was formerly the St James's Church, but more latterly has been used for other purposes. Now it is owned by Goldsmiths and part of the art exhibition was housed in it. I was struck by the stained glass window, located behind where I imagine the original alter was: 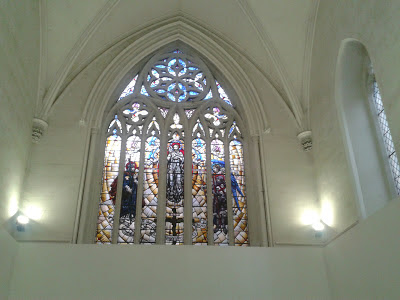 The 'Grand Medieval Joust' at Eltham Palace has been splendid this weekend. We visited on Saturday 15 June and, in addition to the central event of the actual joust, were able to enjoy some of the stalls of medieval artifacts and life from that period generally. 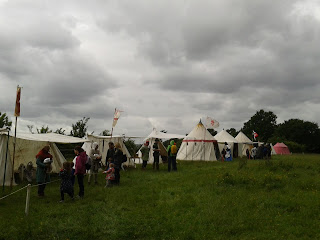 There was an very realistic medieval camp 'enactment' where my husband wasn't sure whether he was walking into some of the 'medieval actors' private lunchtime or whether they were acting out a medieval dinner party, complete with drunken nobleman. Turned out it was the latter! The archery expert at his stall was excellent - I now know more about bows than I could ever imagine (there are ideally made of Mediterranean yew, don't you know...). He referred very knowledgeably to the various historical sources used for evidence eg. the Luttrell Psalter (''...a celebrated manuscript, commissioned by a wealthy landowner in the first half of the 14th century, is one of the most striking to survive from the Middle Ages. Painted in rich colours embellished with gold and silver, with vitality and sometimes bizarre inventiveness of decoration, this manuscript is unlike virtually any other...' British Library). 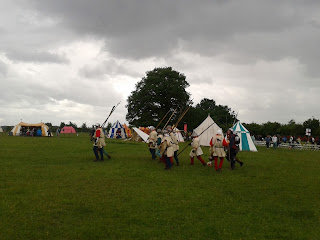 My son took part in the 'Children's Battle' where they are trained in expert fighting with foam swords and in tricky moves which need to be accompanied by periodic cries of 'Choppy, choppy' or 'Stabby, stabby'. Elsewhere a display of Medieval Falconry was taking place. We stayed in our seats in the event field for the Grand Medieval Joust at 12pm where four knights, resplendent in armour, and heraldry, arrived with great pomp on their horses. The crowd were encouraged to support either the blue, gold, green or red knight and wave their flags. The microphoned scoring was professionally done with explanations given before the start. The excellent jester (who we have seen at other English Heritage events) wandered about echoing the scores to the crowd with hand gestures - his gesture for '1' was erm...interesting. 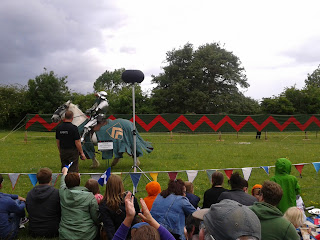 Unfortunately the heavens opened half way through the Joust, despite the compere imploring us that the English should not be so concerned by a bit of precipitation, after all we are not French! Nevertheless, we English rather wimpily scarpered to under the shelter of the nearby big tree, pushchairs, rugs and sandwiches all gathered up and bundled away. Later, we ended up in the obligatory gift tent, where actually there are some rather good things for children - this archer on a horse has taken pride of place on my son's shelf. 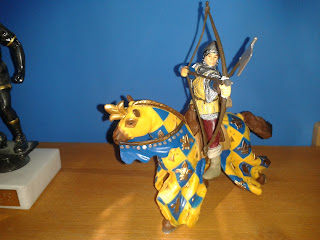 Our English Heritage membership was well worthwhile again - our family of four gaining entry for £5.50 instead of the £31 for non-members. We look forward to the next event.

Some excellent photos here of the day:
http://forum.greenwich.co.uk/threads/eltham-palace-medieval-joust.116/
Posted by Raven Raven at 19:07 No comments: