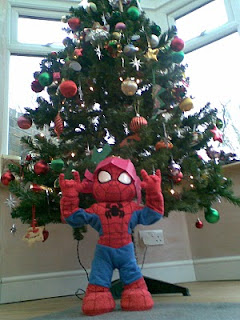 Hope you all have a great Christmas day if you are celebrating, or else a great holiday season.

There's more, much more, which could be said about the annual consumer-fest (you can tell where I'd be going, can't you) but who's got the time at the moment.

So, for now, here's a surreal photo of our Christmas tree...

Also, this is quite funny (and mercifully short) - this 'jingle bells' video clip is doing the rounds on Asian/Indian websites - big belly, big beard, I knew Santa Claus was really Indian:
[ok, so now it's been taken down, you really missed out...]

Email ThisBlogThis!Share to TwitterShare to FacebookShare to Pinterest
Labels: holiday

This is a bit of a picture post (click on any photo to enlarge it, then Ctrl + minus or plus). As you can tell I am totally entranced with the snowy state of south-east London (though pretty terrified about driving out on the ice). The picture on the left is our back garden, and on the right a view of our street.

Also following the snows on Thurs/Fri 18-19 Dec, a sunnier view of our street (top left) and of the back of a forlorn Eltham Train Station (top right).
Then, just as we thought it was all over, the snows came down again during the afternoon of Monday 21st. I happened to be meeting hubby and the children in the high street (they had just been to see Santa at Ruxley Manor, Sidcup - they said it was good, well worth it) and snapped the two photos above of the lovely old church, St John's, which sits on the main crossroads where Eltham High Street meets Well Hall Road. I know that not much of the church is visable but the scenery looked so pretty with the Christmas lights. Btw, you might be interested to know that the church has been the subject of some wonderful 'guerilla gardening' recently - you can read about it here. 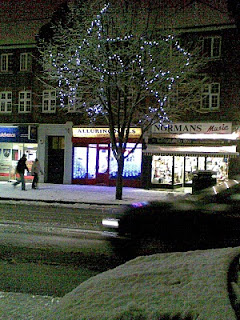 And finally, just as we returned that day to our snow covered car, here's a festive view of the wonderful Normans Music shop in Well Hall Road - long may we continue to have such independent shops in our high street.

'Blogging may be light' (as they say) with all that is happening at the moment - we are off to the Mother Goose panto at Greenwich Theatre tomorrow; we've been for the last three years and Andrew Pollard's productions (and his dame) never fail to disappoint. I hope you all are having a safe and lovely time, whatever you are doing, and even if you are doing absolutely nothing! Ciao.
Posted by Raven Raven at 23:01 No comments:

OMG it is a whiteout out there! This part of the south-east of London is now officially under several inches of snow, with more falling heavily.  Will university be open tomorrow, will the trains be working and will the kids' primary school be closed on what would be their last day before the Xmas holidays?  Time will tell. I shall wait to see how things lie in the morning.

At least I can say that Greenwich Council have had the gritters out earlier this evening. Pretty snow photos to follow tomorrow (hopefully).
Posted by Raven Raven at 11:58 2 comments:

Jay Sean goes up with Down 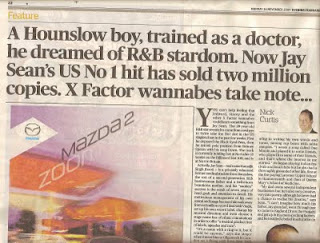 Just over a month ago I noticed something. The Asian diaspora were raving about a first which seemed to have gone un-noticed initially in the 'mainstream' media. It was that Jay Sean, a 28-year old singer, had made it to no.1 in the USA 'Billboard Hot 100 chart' with his single 'Down' - notable because it was the first USA no.1 by a British artist in ages and because it was the first British-Asian one (e.g. BBC Asian Network ran this interview on 12 October).

However, other media soon caught on. I was struck by the headline and double-page spread in the Evening Standard (image above) on 16 November. It goes for the 'transformation' angle - though instead of  the usual 'rags to riches' it's more 'local to global'. JS was afterall training to be a doctor and his parents were 'well-settled' (to use that particular phrase common in diasporic circles).

The Independent also later had this interview. For those not familiar with Jay Sean, the Evening Standard sums up the basic story like this:

"Actually, Jay Sean — real name Kamaljit Singh Jhooti — is a privately educated former medical student from Hounslow, the son of a second-generation Sikh businessman father and a Delhi-born beautician mother. And his “sudden” success is the result of seven years of hard graft and attention to detail. His meticulous management of his own sound and image has seen him walk away from a £1 million record deal with Virgin, set up his own record label, change his musical direction and even choose a stage name free of ethnic connotations in order to offer “a musical product free of labels, agendas and race." 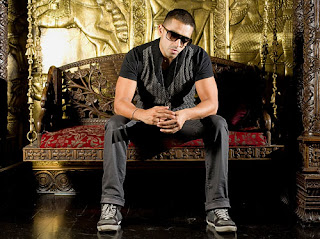 As you can imagine, plenty more angles to be taken up here - for example, there's some debate about whether he could have made it without changing his name (though the answer may lie in snappy marketing rather than racial affiliation). I was also interested in the Jay Sean frenzy because JS is from Hounslow, next door to my old home town Southall, in West London - there are hundreds of musical wannabes there who will be inspired by his story. Good luck to them all (though, like an Indian aunty, I'd have to advise - try and get your education first, eh?)

You can visit lots of YouTube videos to see him in action - amongst them this live performance at the University of Hertfordshire from 2007 in which he also sings in Punjabi too (something he won't be doing a lot more of, I'm guessing).

Oh, and lastly, I look forward soon to seeing this postive success story about an immigrant son on the front pages of the Daily Mail or Express. No? Just saying.
Posted by Raven Raven at 13:32 1 comment:

If you're interested in migration, history, separation and loss then this dramatisation might interest you. I loved reading Andrea Levy's novel, Small Island (2004) a few years ago and shall be glued (if I can get the kids to bed on time!) to this adaptation over two Sunday evenings.

Small Island is Andrea Levy's award-winning story of Jamaicans and Londoners involved in World War Two. Part of the reason she was inspired to write the book was because her own father was on the now-famous SS Empire Windrush in 1948 when it set sail from Jamaica to England.

The drama starts tonight on BBC1. Andrea Levy's narrative switches between four protagonists. The first, Queenie, is Gilbert's white landlady; they met during wartime when he came over as an RAF recruit. Returning on the SS Empire Windrush, he looks her up and takes a room in her house. Hortense, the Jamaican girl whom Gilbert married immediately before boarding the boat, arrives later to share his crumbling attic room; and Queenie's long-lost husband, Bernard, finds his way back, a year after his demob, shortly after Hortense has taken up residence. The year is 1948.

The BBC site also gives us this useful collection of links: 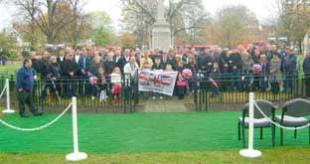 This is Local London reported yesterday on this politicising of a Remembrance Day event:

"The BNP hijacked Mitcham’s Remembrance Sunday event, parading a party banner in front of the War Memorial and duping residents to appear in a photograph.

The propaganda shot has since appeared on London Patriot - an extreme right-wing website - sparking fury among those in the picture who believed it was a photocall for the local newspaper.

Witnesses to the event, which happened moments after Mitcham’s Remembrance service finished on November 8, said the BNP banner was deceitfully handed to a group of children at the front of the picture and quickly hidden away after the shot was taken.

Daphne Adkins, 64, was looking on the memorial for the name of her grandfather who died in World War One when the photocall was hastily assembled around her. She said: “I thought it was just disgraceful. We were completely oblivious to what was going on and I can’t imagine many of the other people knew either. I just thought this was something for the local paper organised by the British Legion. Remembrance Sunday has nothing to do with these people. It was sneaky and disrespectful.”  You can read the rest of this story here.

As various 'tweeters' have commented, "tricking kids into holding their banner, how low can you get?"
Posted by Raven Raven at 11:13 3 comments: