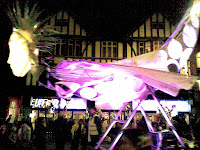 "Eltham will be transformed on Thursday 15 November as the Royal Borough of Greenwich hosts the 13th annual Eltham Lights Up Christmas Lights switch-on.

Eltham High Street will come alive with a range of entertainment, music and sports activities from 4.30pm onwards. Come along early to have fun and get a good view!

The Christmas lights switch-on at 6pm will be followed by a spectacular illuminated parade of lanterns created by hundreds of local children and their families. The parade will also feature giant structures and live music.

Eltham High Street will be closed to traffic between 4pm and 8pm.
The Eltham Centre will join in the celebrations with an official switch-on of its Christmas tree lights at 5pm and performances from Eltham Hill School Steel Band from 4.30 and Eltham Choral Society at 7.15pm. OJ's café will also be offering special discounts.

To add to the festive theme, there will be a Christmas market stall in Passey Place from 9am to 7.30pm, and Eltham Fire station will have an open event from 4pm to 7pm."

"The Plumstead Make Merry Association in conjunction with the Greenwich Rugby Club, will be holding a sporting spectacular on the afternoon of Sunday 14th October, from 12 noon to 3pm on Plumstead Common (London, SE18). Primarily this will consist of a Tug-of-War contest and a Three-Sided Football tournament, but we are also hoping to have some entertainment, and be serving food, the Rugby Club Pavilion will also be open for anyone requiring liquid refreshments......" more on the Plumstead Make Merry website..

Free, but donations are welcome – all money raised helps to care for the animals. A great day out for all the family, including stalls, crafts, activities and more.All are welcome at the Woodlands Farm Trust Apple Day. Come and celebrate National Apple Day with a variety of activities including crafts, a treasure hunt and apple pressing to make delicious juice.There will be stalls selling local produce including honey, home-made jams and cakes. Live music will be provided by Skinners Rats.

Find out more on the Woodlands Farm trust website 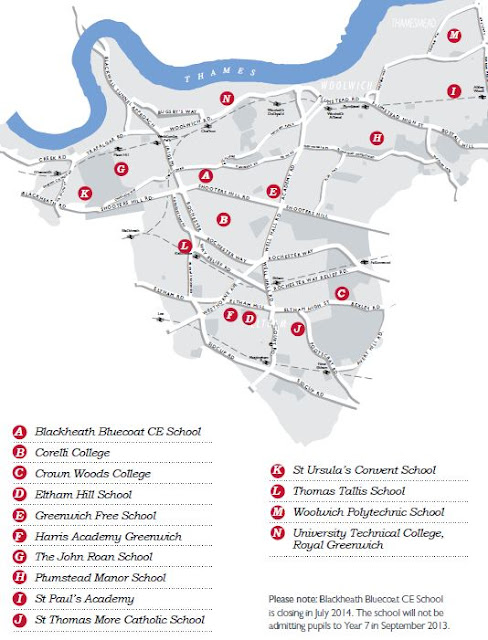 Every parent of a Year 6 child in the Borough of Royal Greenwich has one thing on their mind at the moment. 31 October is the deadline for submitting the CAF (Common application form) to our local council listing up to six secondary schools where we'd wish our child to be offered a place. Greenwich Admission booklet here, and the CAF here.

For the past year or so a feverish round of conversations, visits and soul-searching has been taking place. All culminating in the golden choice - 'the one' that you must get your child to attend, by any means necessary (believe me, this feels like it has all the intensity of Malcolm X...)

The round of open days and evenings typically takes place in September and October each year. We visited a number of the schools a year early, in autumn 2011, and are now in the middle of revisiting them this autumn. Most secondary schools in Greenwich are on the cusp of 'great change' involving fantastic new buildings and/or new governance arrangements. Their GCSE results are creeping up, and to just above the national average in some cases. Here's a list of the main state secondary Greenwich schools with links to the Council summary:
The big elephant in the room, or this post, so far is the matter of grammar schools. There are none, of course, in the borough of Greenwich which is why ambitious Greenwich parents try in their droves to secure grammar school places in the neighbouring boroughs of Bexley and Bromley and also in Kent. The percentage has been pretty high (I've seen it somewhere, can't find it now, double figure percentage).

To be eligible to apply for a Bexley Grammar school, children need to be deemed 'selective'. They achieve this by passing the 'eleven-plus' exam. On 18 and 19 October this year, thousands of children sat this Bexley test comprising of a 50 minute Maths paper and then a 50 minute 'Verbal reasoning' paper - results will be posted on 10 October.  It goes without saying that many children are heavily tutored to pass the 11+, not something which all parents can afford nor have the wherewith all to arrange so far in advance. I know that the majority of children in my daughter's class who sat the 11+ were all tutored. We decided at the last moment to enter our daughter for the 11+ and see what happens. In the three weeks before the test, after returning from languishing in France, we did some revision and some past papers (there's a whole industry in those out there...).

However, passing the 11+ is not the end of the matter. Demand for grammar schools by far outstrips the supply. And this is the rub. Out of the thousands taking the test only the' top 180' in the Bexley test are 'guaranteed' a grammar school place. I saw a figure for a very recent year: out of the 4,500 children who sat the Bexley test, 1294 were deemed selective. So being in the top 180 is no mean feat! You really have to be the cream. The remaining grammar places are allocated according to the school's policies which mainly comes down to catchment area.

All this causes some occasional angst amongst Bexley parents who resent the high numbers of 'out of borough' (the 'oobs') children with whom they have to compete to secure a school place, grammar or otherwise, in their own borough, resulting in petitions and representations to Bexley Council. Whilst I get the feeling that Bexley Council are sympathetic, they are hampered due to the 1989 'Greenwich ruling' which established that maintained schools may not give priority to children for the sole reason that they live within the LEA's administrative boundaries.
Many of the Bexley state schools and grammars are fairly close to the boroughs of Greenwich and Bromley and so children get in from there rather than particularly the north of Bexley Borough which is further away. I've seen a claim that the Harris Academy in Falconwood, Bexley, that has a 1.7mile catchment has 70% of its pupils from Greenwich, not sure how true that is.

Back to the Greenwich state secondary schools. Those we've visited include:

Crown Woods College - a school which, to be honest, in past decades has had a poor reputation. Now it has completely rebuilt, reorganised and rebranded itself. It is divided into three 'schools' on the same site of 90 pupils each, one of these schools being for the 'gifted and able'. We've visited a few times. It has a good vibe and the Headteacher gives a good talk. It's GCSE results are creeping up to. The gifted school is a curious piece of selectivity - "we're not allowed to call it a grammar school but..." we were told. Many Greenwich parents seem to be choosing the Delamere 'mini-school' as an alternative to going for Bexley grammars.

Thomas Tallis - again, a school which has a brand new spanking building. It has always had better results than most of the state non-religious Greenwich secondaries. It specialises in creativity and each time we've visited it's been fizzing with warmth and activity. The headteacher and senior team give a cracking, inspirational talk which is hard to resist, even with your best cynical hat on.

Harris Academy Falconwood - resurrected from a previously dire school and there's no doubting the massive uplift in performance. But, but...I have to say I failed to connect, so far, with it in any way.

We'll also be visiting the new Greenwich Free School out of curiosity, though it is probably the closest school to us - interesting piece on the 853 blog about that school.

One problem for parents this year is timing. Only 2011 school results are available officially. The 2012 results can only be gleaned from the individual schools themselves. They will not be published by the Department For Education until January 2013. I noticed the Greenwich Conservatives having been pushing the Council to publish these results. The Council have issued this information. If I had more time, I'd collate them here myself, but I haven't for now...

So good luck to every parent and child going through this stressful time at the moment.  Tell me which schools you are liking.
Posted by Raven Raven at 07:45 4 comments: