Day out on the Greenwich Peninsula

The shot above is of a stretch of the river running from the O2 arena ('the Dome' for oldies) on the right, to the edge of the Greenwich Yacht Club on the left. It was taken standing outside of the Greenwich Peninsula Ecology Centre. 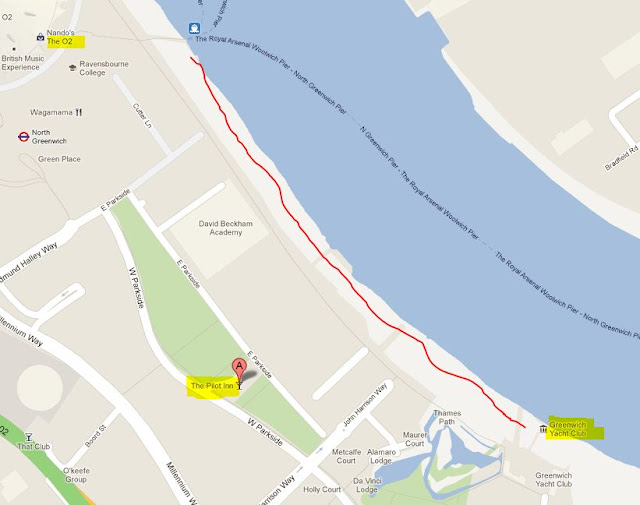 Here's a map of the local area, with the photo span marked in red.

We ended up unexpectedly at this spot having had a lovely lunch at the Pilot Inn, a pub dating back to 1801, a lone clump of small buildings clinging on in a no-man's land, despite the building of the O2 arena and the 'Millennium Village' around it. Despite this, it is a pub with a lovely feel, including an outside garden. My Greenwich-born and bred husband remembers uncles coming to drink here at 'their local' when it was still set in a light industrial area. 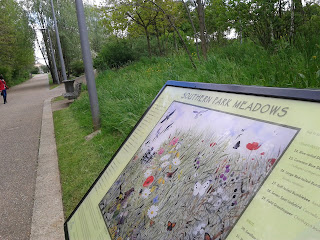 We sauntered from the pub through the 'Greenwich Millennium Village', brightly coloured newish flats, with mecano balconies built as part of the regeneration of this area at the turn of the millennium. Some of the balconies overlooked waterways, giving a holiday feel to the place (well it was sunny!). At times we walked along boarded walkways through the reeds and nesting birds. This is where the village butts on to the Greenwich Peninsula Ecology Park. 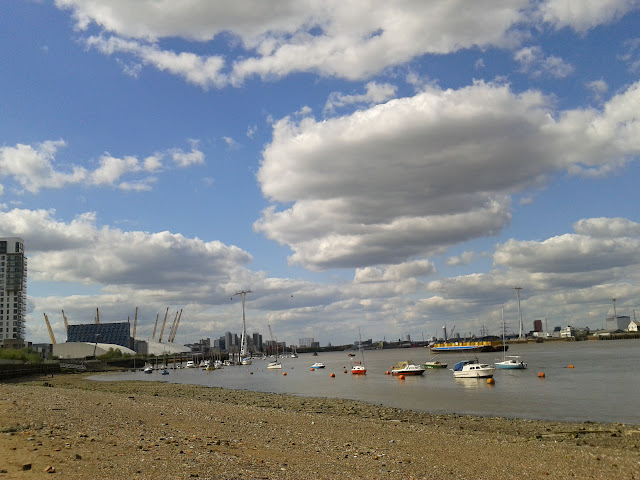 Then our view expanded and we came out to a stretch of river, with the O2 to the right, with the new cable car ('Emirates Air Line') testing going on, and the Greenwich Yacht Club to the right. (You can read more about the fascinating cable car project here.) Ducking under the fencing, we got onto 'the beach'. It seemed amazing to find such a relatively unspoilt part of the river where you could get up and close. Little boats bobbed, and the water lapped up on the sand, pebbles and debris. The children became engrossed in beachcombing - lots of pottery, though more C20th than Roman. A word of warning though - we could see from the dampness underfoot that the water comes right up to the top when the tide is in. You should never stray far from being able to get back up onto the walkway.

Rivers and boats: messing around in Greenwich

We spent the afternoon in nearby Greenwich last Sunday. We had decided to sign up for membership of 'Royal Greenwich Museums' - at £75 for annual family membership, it would be rude not too! This includes free entry for 2 adults and 2 children to the fee-charging bits of the National Maritime Museum (NMM), the new Cutty Sark atop the conservatory, the now-gated and ticketed Royal Observatory and the Planetarium (we love the shows here), as well as a few other bits and bobs. 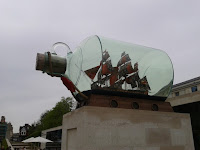 Before that, as we entered the park-side entrance to the NMM, I saw for the first time Turner prize winner Yinka Shonibare's 'Nelson's Ship in a Bottle' (2010) which had previously been displayed on the 'fourth plinth' at Trafalgar Square. I hadn't realised what a large piece it was. It was a shame it sat on so a high plinth as I could see the work, and those textile sails, closely enough. It's a very fitting piece though for the maritime content of its new setting, but also bringing modernity and complexity with its questions about empire and multiculturalism. 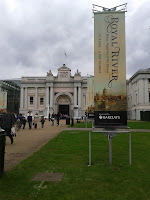 We had a quick sail around the new exhibition, opened by the Queen last month, 'Royal River - Power, Pageantry and the Thames' (until 9 Sept 2012). Yes, it's the exhibition curated by the controversial David Starkey. Anyone taking young children around museums and galleries will know that you can only ever have a cursory glance around, leaving half-read labels and tantalisingly barely scrutinised pieces in your wake. Sure, it all starts off well, 'children's activity trail' in hand, but descends soon enough into 'I'm tired/want the loo/hungry/bored'. We didn't do too badly though. The children were familiar with some of the monarchs and scenes depicted because, contrary to popular belief, primary schools (well, theirs at any rate) do cover 'kings and queens'.

I'd heard some criticisms that the exhibition is a bit of a 'rag bag', lacking cohesion, with some unexplained departures from the river theme (e.g. Anne Boylen's music book?). A critic suggested on Late Night Review that it would have been more apt to have a 'people's river' exhibition. Maybe so, but there was enough to keep this amateur amused, and even enough to make me want to go back and go round properly plus the audio guide and minus the children! 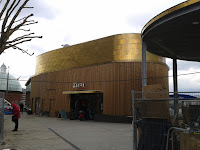 Then it was off to hunt food for a late lunch. Everywhere was packed, with waiting time for tables, on this Bank holiday weekend. So I admit that, after a short wait, we ended up at one of the much-criticised new food outlets on the new Greenwich pier. There are 3-4 of them, the usual chains, all looking identical (photo left). Where did all these people eat before these outlets were here? 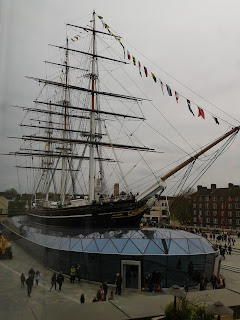 It was too cold (in May!) to sit out on the first-floor terrace, with what must be wonderful views, but from the stairwell of the restaurant I managed to get this vantage point photo of the new Cutty Sark, on top of its new glass sea-wave. The newly-refurbed Cutty Sark was opened by the Queen on 25 April, a horribly rainy and windy day. We're saving the pleasure of visiting inside for when we can do it justice - it's now £12 a ticket, though of course free to members. 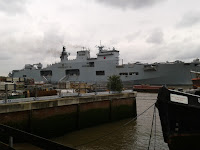 After lunch we ambled along the river and saw HMS Ocean which had recently docked at Greenwich. The 'Royal Greenwich' website gives this info about the ship:

The day after we visited, an Open Day was held for Greenwich residents, with boats transfers. That would have been very exciting, especially for my son, who was recently enthralled by cruising past the HMS Belfast.

It was time to race back to the car park before our four-hour ticket ran out, especially as we had parked in the place behind the Ibis Hotel, where it was an eye-watering £2.50 an hour!

It was a lovely day - despite visiting frequently, there always seems something new to do at Greenwich - we're lucky to live so nearby.
Posted by Raven Raven at 07:30 No comments:

This looks very interesting...
The Asia House Festival of Asian Literature 15-31 May, 2012 The first and only festival in the UK dedicated to writing about Asia and Asians.

Some highlights which caught my eye are:

Tuesday, 22 May, 18.45
Women, Power and Politics
with Peter Popham (of 'The Lady and the Peacock')
Rani Singh (of 'Sonia Gandhi')
Mukulika Banerjee and Jane Macartney

Greenwich and Lewisham keep Duvall and London re-elects its Mayor

So, Boris has beaten Ken by that painfully narrow margin of 3% but Labour's Len Duvall is re-elected with almost 50% of the vote as Assembly Member for Greenwich and Lewisham.  You've read it all elsewhere by now, but here goes for posterity:

Despite a result promised early in the evening, especially given the low turnout, we were kept on tenterhooks until almost midnight. During this time, the result kept being expected 'in about half an hour' but was constantly pushed back, with tales of 'lost and found' ballot boxes and the electronic counting machine failing. Then finally they assembled and the nerve-wrackingly close result announced. Boris stepped up with a shambolic speech, sounding like he had forgotten he was not still on a campaign trail, trotting out transport developments in a "neo-victorian surge". He later remembered to thank a few people, including inviting Ken for a "non-taxpayer-funded libation". Then the tragic figure of Ken - I felt very sorry for him. I read somewhere he looked like a 'sad ET'. He has London in his blood and London was his end game, not a stepping-stone to a post elsewhere. (He was also my indirect boss for a few years in the mid-eighties when I worked at County Hall for the ILEA - I occasionally passed him on the stairs on the hallowed, wood-panelled 'member's floor' - he always had a cheerful hello even for us juniors).

For my local constituency, Greenwich and Lewisham, notably - Duvall actually increased his vote share from 36.2% in 2008 (table below) to 49.6% yesterday (above). The Tories down from 25.2% in 2008 to 20.7%. The Lib Dems took a drubbing dropping to 4th position this time behind the Greens, reflecting the Mayoral table.  UKIP increased its share from 2.7% to 3.8%. The BNP did not stand in 2008 but the National Front did then get a whopping 5.8%. This time though both parties fielded candidates in the same constituency (!) (as they did in some others - must check those) but even then got a combined 4.3%. As others have commented, the collapse of the openly far-right has been a real success story in these elections, given the mood across the water in France with their Front Nationale getting almost 20%. On the other-hand, the UKIP vote (some call it the BNP for the polite) increased in Greenwich & Lewisham.


In Greenwich & Lewisham, here's how we voted this time for the Mayor:
Despite backing a Conservative London Mayor, voters increased the Labour share of the London Assembly. The London Assembly has 25 seats - each of the 14 constituencies elects one assembly member using the first past the post system. The remaining 11 seats are for London-wide members, who represent the whole of the city.

So the 2012 London constituency map now looks like this (compared to the one in 2008):
While voters were attracted to the celebrity of Boris for Mayor (despite being reminded that they were not voting for a game show host), elsewhere Labour made gains, in London and in Council elections which were held. Much more to add, but that's it for now, look forward to other local analysis - we're off out!