New Eltham's Fiddler on the Roof 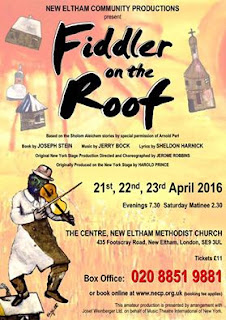 Musical theatre is not normally my thing. The final straw came a couple of decades ago when I had to walk out of Lloyd Webber’s never-ending show, Time, at the interval – I couldn't stand it anymore.

All that suspension of disbelief, all those excruciating looks on their faces as they emoted around tenuous plots – no. No more. I was done.

It may be surprising to hear this from a Brit-Asian bought up on a diet of Bollywood's musical films. In these films it was an unremarkable and frequent happening for 30, or more, backing singers and dancers to suddenly pop up and accompany the hero and heroine as they burst into song in some verdant scene.

Admittedly, the more excessive fantasy sequences went out with the 80s and 90s (I’m thinking demure Indian woman, with improbably blonde wig, with oversize silver puffball sleeves, swinging on a huge low-slung crescent moon amidst a smoke machine on full power…you get the picture). No, these days one is able to enjoy more ‘realism’ in Bollywood cinema, though it’s all relative of course. I mean, the highly-westernised, elite wealthy, light-skinned lives portrayed in many of today’s Indian blockbusters are a million miles away from the lives of ordinary Indians.

I was amazed then to find myself transfixed by last night’s production of Fiddler On The Roof by New Eltham Community Productions (NECP), a performing arts groups based at the New Eltham Methodist Church in the south-East of London. What had initially been a well-meaning booking to support some local artistic activity has now turned out to be a revelation.

The stunning quality of all the creative talent on show belied the fact that this was an amateur production. The spot-on choreography, the surprise live orchestral music, the period costumes, the track lighting and, of course, the acting, would not be out of place at a central London venue at a ticket four times the price. Instead, we were sitting in a small church community centre in a sleepy suburb (or ‘New Eltham Village’ if you please…)

‘Fiddler’ is of course a well-established musical play and film, a staple for amateur companies – the story of a life in Anatevka, pre-revolutionary Russian Jewish village, focussing on Tevye’, a dairyman and the ‘Papa’ trying to bring his daughters up according to the long-held traditions of the community. Modernity and love get in the way, as ever. The setting may seem obscure but its universal themes, and stonking tunes, have proved highly-appealing. Come to think of it, this IS every Bollywood film!

This NECP production is skilfully directed and choreographed by Hannah Bond.  The large cast challenged with many musical numbers and dances were brilliantly handled. The catchy opening whole-cast number ‘Tradition’ set the tone and was a refrain throughout. Later “If I was a Rich Man” was subtly done without giving into to hamming it up. The key lead Jewish father, Tevye is played brilliantly by Neil Stevens who, by all accounts, grew a beard especially for this part along with other male cast members. He struck just the right note with his combination of serious and comedic acting (“On the one hand…, on the other hand…, on the other hand, there is no hand”). For me, a large part of this production’s success was Neil Stevens’ ability to hold the audience for his solo pieces and to take us so convincingly with him on his journey. The acting was matched by his stage wife, Golde, played magnificently by Rachel King, with both of them excellent singers too. 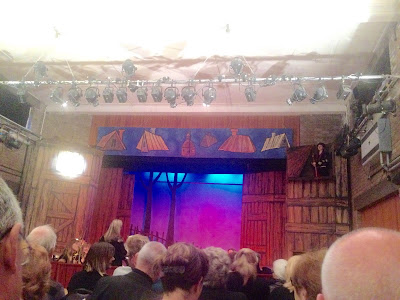 A real and unexpected treat was the live orchestra and the entrancing 'fiddler' who started off playing in a small balcony above the stage and then descended later to interact with Tevye as he muses on life.

There was poignancy, comedy and romance in the portrayal of this little village but also the intrusion of the darker outside world. We see this Jewish community in Russia subjected to a progrom by anti-Semitic Czarist forces forcing our characters to flee and scatter, many setting off to emigrate to America as refugees, a sadly familiar scenario still with us though with different collection of communities, faiths and countries.

In short, I’d thoroughly recommend this production though it finishes its run tonight! However, I’m so glad to add the discovery of this gem to our list of local Eltham and SE London venues. We shall be looking out for the next NECP production.