So, following my post yesterday about the Eltham North ward by-election on 10 November, Royal Greenwich have speedily published the list of candidates, the morning after nominations closed:

What do we know? 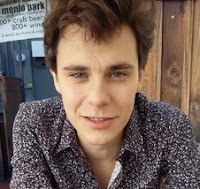 Davis stood unsuccessfully for the Eltham West ward in 2014 coming 4th behind all three Labour candidate. The Greenwich Conservatives website tells us: "Charlie Davis lives on Dunvegan Road and works in financial services, and previously stood to be an Eltham councillor in the 2014 local elections". Tweets at @CDavisEltham.

The Greenwich Lib Dem website tells us: "Sam lives in the ward with his wife and three children. He's particularly concerned about local early years education, safety on our roads, and improving the quality of local community facilities.
Sam is also a brand new member, having joined us in July, and he's keen to take the fight to both Labour and the Tories."  He tweets at @SamMacaulay3 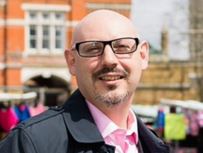 Peirce was Labour's 3rd candidate for the Eltham North ward in 2014 and came in 5th. Supported by local Labour MP Clive Efford and Council Leader Densie Hyland, Peirce tweets at @Peircey99 where he is described as 'Trade Union activist/ campaigner in Eltham and Woolwich.'


Ray, Barbara - UKIP
A different UKIP candidate than for the 2014 election when UKIP came 7th. Ray stood for the Hornfair with Kidbrooke ward in the 2014 local election where she came 4th, behind all three Labour candidates but ahead of all three Tory candidates.  I can't find a pic but this may be a (fairly dormant) twitter account, @Barbara76694562.
Posted by Raven Raven at 12:09 No comments:

Councillor Wynn Davies has resigned and there is to be a by-election on 10 November for the Eltham North ward. The Royal Greenwich borough website has this notice on their website - candidate nominations close today (14 Oct) and voting registration closes 25 Oct: 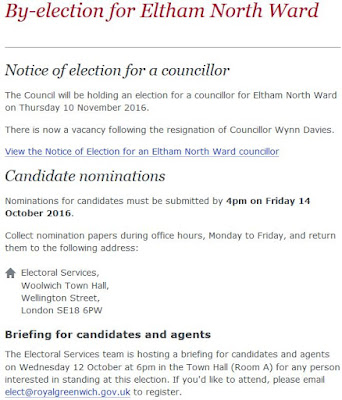 Eltham North is one of the Borough's 17 wards since their redrawing in 2002. Wynn Davies was elected one of its three Councillors in the 2014 local elections when the ward was a closely watched contest. This is because for a long time the ward had been one of few blue spots in a sea of red which otherwise typifies the Borough's wards. With UKIP-fever riding high in 2014 in the pre-referendum era (remember those days?), we all speculated about how far UKIP would dent the Tory or Labour vote.
Here's the Eltham North ward's Councillor history:

The 2014 election of Davies and his Labour colleague, Linda Bird, marked a significant shift at the time, not just for reducing even further the already small number of Conservatives elected to Royal Greenwich Council, but also because of the unexpected ousting of Nigel Fletcher, the young personable Conservative Councillor. 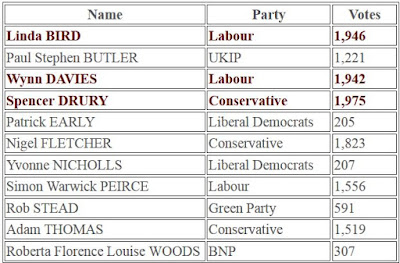 Only six votes between the 2nd (Bird) and 3rd candidate (Davies), and only 123 votes between the 3rd (Davies) and 4th (Fletcher). The closeness of these results again makes this ward election one to watch.  The EU 'Leave' referendum result may now have taken the heat out the UKIP vote, though the effect of national Labour's current travails remains to be seen. 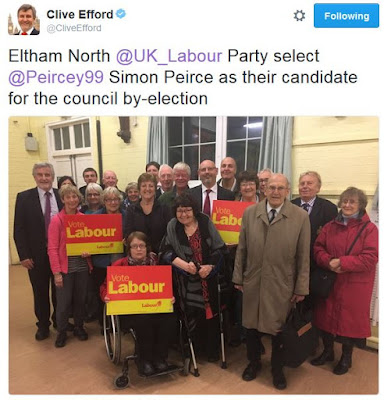 Since losing his place in the 2014 local election former-Eltham North councillor Nigel Fletcher has been busying himself with his PhD and and his work with the Centre for Opposition Studies of which he was a founder. However, he was also declared recently as a Tory candidate for the neighbouring Eltham South ward for the next local elections in 2018. Question is, now that Eltham North has come up 2 years earlier, would he want to jump back to his former ward? Is it allowable and/or the done thing? If not, who will the Tory candidate be?

Good luck to Wynn Davies who I met once at an Eltham Arts AGM meeting and to whom his fellow Labour Councillor posted this tribute: 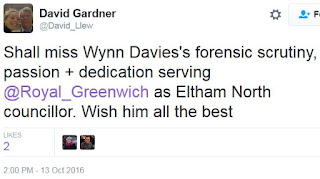 Finally, if you're wondering which areas the Eltham North ward covers, here's the boundary from the Royal Greenwich website: 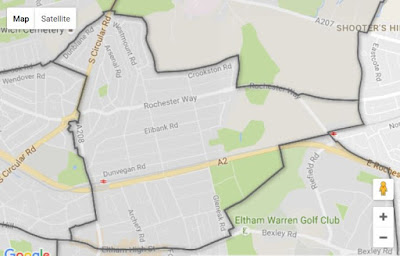 Update: Just seen that the LibDems have announced ward resident Sam Macaulay as their candidate.