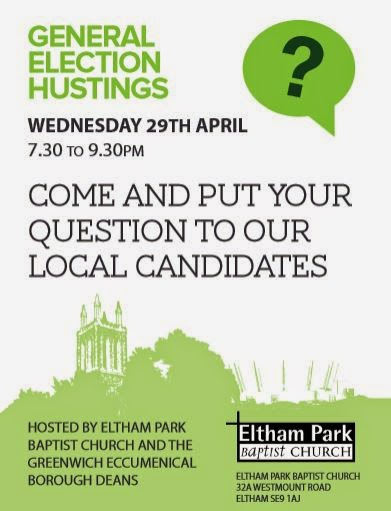 Last night we had before us four out of the five candidates standing for the Eltham constituency in the General Election on 7 May.

Eltham is a marginal constituency, in the southern half of the Royal Borough of Greenwich, with some interesting developments. The 2010 election saw the Labour candidate hold his seat with a majority of 1,663 (4.0%).

We gathered at 7.30pm in the Eltham Baptist Church on Westmount Road for this little advertised event. It was a packed house. The chair turned out to be the resident pastor, 'Rev Paul' as he introduced himself. The candidates present were, in the order they were sitting, left to right:

Alex Cunliffe (Lib Dem), Spencer Drury (Conservative), Clive Efford (Labour), Paul Oakley (UKIP subbing for candidate Peter Whittle), James Parker (Green)
'Rev Paul' began the proceedings very efficiently explaining the structure but a bit disappointingly letting us know that there would be no questions from the floor - instead only pre-written questions, tidied and selected by a 'team', would be accepted, with no discussion.  This drew some consternation on Twitter (I was attempting to cack-handedly 'live tweet' the event):

Each candidate began with a five minute statement, timed with frightening efficiency via an overhead countdown display (we need this at work meetings...).

A terrible summary of their statements:

Lib Dems:  spoke on what they've stopped the Tories doing over last 5 years; what their own priorities are; listed the 'red lines' from their manifesto; being proud of holding back extreme positions and holding the centre ground.

Labour: Not been a greater divide between the parties. The choices are clear. Listed the services Labour would want to protect. Want to clear the debt but also want to do it in a fair way. Pointed out that young families have suffered most, according to a study he quoted. Wants to build houses, protect society and deal with the economy.

Cons: Stressed that he was part of the local community. Wants to get the big picture right, economy etc. and also focus on local issues ie. school places, housing etc.

UKIP: Concentrated on the national economic picture; questioned where the Tory £8bil for the NHS was coming from; HS2 "was ridiculous".

Greens: wanted to look not from a petty politics perspective but from an intelligent perspective; the coming climate crisis needed to be recognised. (sorry, I drifted a bit during this...)

And then they were off with the questions - paraphrasing them:
(Sadly, I don't have time now to post fully on their replies to the questions but there were no surprises, here's a flavour...I may be able to update this later, or not..)


Q1: How do you intend to deal with/resolve/manage (?) the spiralling debt of the NHS?

(Labour would build up a fund from various sources e.g. Mansion Tax. Tory was 'bemused' and felt Tories had sorted out things locally eg. QEH debt, Eltham community Hospital. LD (I drifted) but I'm sure he said they would sort it out, his wife works in NHS... UKIP said they disagreed with everyone. Gave Lewisham A&E example as one of people victory against Tories. Redirect Foreign Aid money)

Q2: Many children have not been offered their first choice of school; how will you resolve/address this, and we don't want to hear you doing the 'blame game' in your answer?

Q3: With the high deficit, are we living beyond our means and do we have the right to burden our children with it?
(everyone said yes, and no to this question)

Q4: What are you planning to do about the rise in violence?
(Bit of bemusement - what did the question mean? Some candidates answered on a local/national basis, others widened out to extremism; bit of discussion here about local Safer Neighbourhood Schemes)

Q5: Why are there no women on this panel? What are you doing to involve more women?

(All agreed should be encouraged. Drury held up Elizabeth Truss as a recent success story, so good now propelled to the heart of govt; UKIP agreed, said he'd been 'friends' with Truss 'for a long time' and pointed to their 'brilliant candidate' in Lewisham East, the controversial Anne Marie Waters...)

Q6: What are you planning to do to alleviate housing and give young people a choice of owning their own home? (asked by Eltham North Cllr, Linda Bird)
(Basically, need to increase the supply, restrict overseas buying, make affordable, against big local developments eg. Kidbrooke, that don't help)

Q7: What are your thoughts on freedom of speech, freedom of thought and dissent in society being suppressed due to laws on perceived bigotry?
(again the standard answers, with obligatory mention of the Voltaire quote (that wasn't actually a Voltaire quote); big clap for Drury when mentions the 'propaganda' of Greenwich Time)

Overall, although there were no surprises, it was good to see the candidates and hear from them in person. Questions from the floor would have been a good alternative but that would have involved a different ball game for organising this.

There's so much more to add but I have to feed the kids, make their packed lunches and go to work now...(cue violins).
Posted by Raven Raven at 08:31 1 comment: Links to this post