So finally we are taking the children to visit India, the place from which my family hail, and from whence my parents emigrated to the UK in the early 1960s. It was in London that my brother and I were then born and where we have made our own lives.

My husband, however, is not from an Indian background, his family being born and bred south Londoners for generations. All these factors hare inevitably meant that our children's bi-culturality is a bit lop-sided. Despite the best implorings of my mother, my talking in Punjabi regularly to my children in an otherwise English setting just didn't happen. And so, after all these years of only hearing about India and being touched by Indian culture in a peripheral way, our children will finally get to see the place and meet some extended family. My husband has done this once before, 14 years ago, the year we were married when, with the eagerness of a newly-wed he foolishly agreed to meet more of the the in-laws.

I have been to India many times before I was married, though less so in the last couple of decades. Incongruously, my brother and I were even sent back for a few months of boarding school there, near Simla, in our primary school years, while my mother was in the UK. A madness that my mother soon changed her mind about, hence the short time there.

It was really at my mother's encouragement that we have set up this current trip. She still visits India frequently, having siblings and nephews/nieces there, and around 2002 she finally bought her own little house in the Punjabi new town of Chandigarh. Not getting any younger, she was very keen to show our kids 'her manor' and to show them off to family there. She and my brother will be traveling to India a week earlier and will meet us there.

The visit is most significant for me because of our children. It's that strange diasporic phenomena of having perhaps emotionally separated from your heritage country, and even having ambivalent feelings about it, yet despite this so wanting your children to have an attachment to it. An Irish acquaintance tells me that this is exactly his experience when taking his children back to Ireland for the first time. It's a strange crossroads of a time when all sorts of repressed emotions come to the fore, questions of identity and belonging, which perhaps you had not really appreciated before. But also looking back on my younger years and musing that, what may be generational differences within some families, in a diasporic family these also become interwoven with cultural differences between the different generations.

But back to the trip - we'll be visiting the northerly state of Punjab, which borders Pakistan of course, flying in to New Delhi and then basing ourselves in Chandigarh, at my mother's house. More of that later, but let me set the geographical scene... 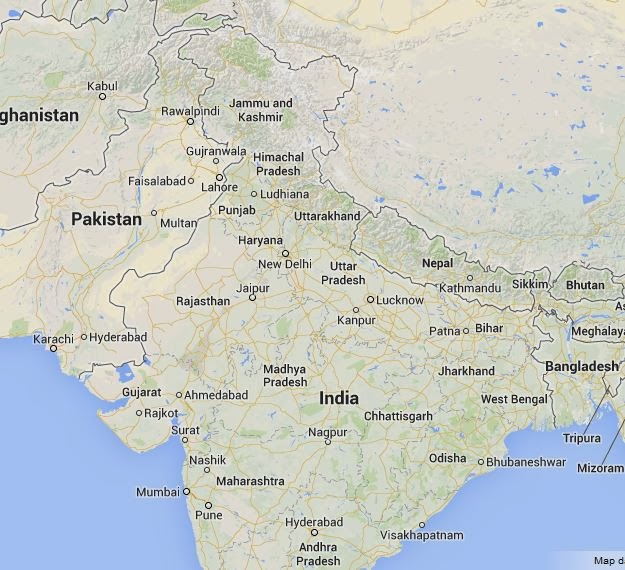 So here's a map (click on images to enlarge) of the upper half of India, with its capital, New Delhi, in the north. Our time there will only touch the NW area of the vast land that is India, and within the state of Punjab. 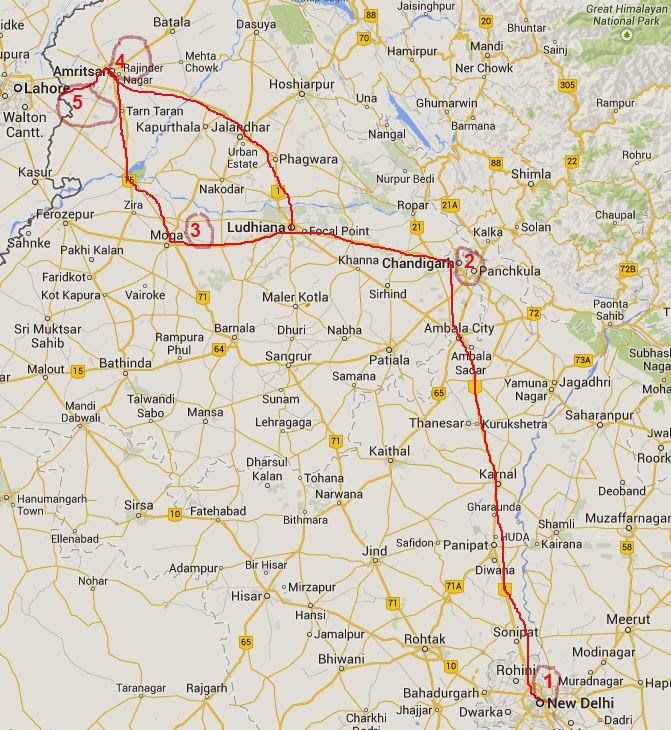 This is the territory that our 12 day trip will cover, with the main places of staying/visiting marked out.


We've got this tentative itinerary planned, but this will very much depend on the pace, and the heat, that we and children can cope with once there:

Day 1
Sun: Overnight flight To New Delhi from Heathrow
(we've pushed the boat out and will be flying in Virgin's 'Premium Economy' class - here's the oh-so-important additional 'luxuries' you get, that mean you can look down on Economy, though still look 'up' to Upper Class - a bit like the 1960s sketch with Cleese and the Ronnies...I think a good linen tablecloth is always an essential... We decided that the kids could best cope with the 8-9 hrs flight if they slept overnight, especially as we still have the 5-6 hour drive to Chandigarh ahead once we land. Let's see how that works out...)

Day 2
Mon: Arrive at New Delhi
(to be met by the car which mum will have sent ahead - that should be interesting trying to find the driver in the busy airport...)
Drive, 5-6 hours to Chandigarh
This will be along the (in)famous Grand Trunk Road, one of Asia's oldest roads apparently, and much eulogized in various Punjabi songs - a bit like America''s 'Route 66'. We'll be stopping for lunch at one of the 'dhabas' (or roadside cafes) which Punjab is well-known for.

Day 3 and 4
Tue and Wed: ​​Chandigarh
And so finally we will get to spend some time at my mother's place in Chandigarh. Known as the 'City Beautiful', Punjabis are very proud of having India's first 'planned city', as famously designed by Swiss-born French architect Le Corbusier. He was commissioned by Jawaharlal Nehru, India's first prime minister, to build a city that would replace Lahore, the previous capital of the Punjab lost to newly created Pakistan after partition in 1947.

Day 5
Thurs : the village tour
Leave very early to travel to west Punjab by car (3.5hrs) to my mother's ancestral village home, and the villages of some nearby relatives (area around no. 3, Moga, on the map). My mother has very efficiently pre-informed various relatives about when we will be arriving at each of them and how long we will stay at each. This is to avoid, very wisely, the protracted insistence at each place on extended hospitality involving long elaborate meals. Stay overnight at cousin's house.

Day 6
Friday: travel to Amritsar
Leave after lunch for Amritsar (2.5hrs by car), the most northerly place we'll be visiting and only about 35 mins from the Pakistan border. This is the site, of course, of the so-called 'Golden Temple' or to give it its proper name, 'Sri Harmandir Sahib'. It is the holiest of places for Sikhs to visit, akin to a Sikh Vatican. It was in the UK news this February when archived papers revealed the hitherto unknown involved of the British government in the events of 1984 at the Temple - this was when the Indira Gandhi's government unleashed a violent attack on the Temple, killing many people (575 officially, more unofficially). Amritsar is also the site of the Jallianwala Bagh massacre, also known as the Amritsar massacre, in April 1919. That atrocity was depicted at length in Attenborough's Gandhi film.

We hope to visit both these places - one very beautiful, the other very poignant.

Amritsar is an iconic Punjabi city - steppeed in history, narrow cobbled lanes and famous for its food and 'chic/vintage traditional' fashion shopping,  We plan to stay overnight in a nice hotel, hopefully with swimming pool to give the kids some fun. We might also, if time, visit the Waggah border ceremony at dusk - famous for its nightly ritualistic and exaggerated 'closing of the gates' ceremony between the Indian and Pakistan border, as depicted on an episode of Michael Palin: "a masterly display of just how angry you can get without hitting anything!"

Day 11
Wed: ​Travel To Delhi
​​Check in to hotel, ​​explore Delhi​​ and celebrate daughter’s birthday, maybe at Connaught Place’s TGIF, to give her something familiar.

Day 12
Thurs: Delhi sightseeing
​​Breakfast in Delhi Hotel, b​rowse Chandi Chawk​​ ('moonlight place') an ancient shopping site, visit the 16th century Mogul Red Fort, ​cool off by the pool in the afternoon and ​explore the markets in the evening (hmm..bit ambitious this day)

Day 13
Fri: ​​hotel then fly home
Leave for Delhi airport and flight back home to UK.

And that, my friends, is the plan! Let's see how it works out. We're quite relaxed about changing things where we want to, and go with the flow, but you've got to have an aim, haven't you?

Our trip will have the added interest of a little election going on in India - the election of the 16th Prime Minister of independent India, by over 814 million citizens over six weeks of voting beginning 7 April. The front runner could unfortunately see India having its first non-secular leader, against the spirit of the constitution established by the first PM Nehru.

Lots more I could write, but another time...so adios, ciao and namaste. We out.
Posted by Raven Raven at 08:00 1 comment: