Flotilla of one on the Norfolk Broads

If you wanted to escape Jubilee fever, going to the Norfolk is probably not the best of plans. It is not known as a hotbed of republican sentiment. Far from it I imagine. However, that is where we are going to be for the next week. We shall be in our own flotilla of one on the very day the Queen sails down the Thames in her royal pageant. No gilded royal barge for us, but a modest motor cruiser on the Norfolk Broads with all that's needed for a family of four to explore this beautiful part of the country.

We'll be picking up our vessel at the boating town of Potter Heigham. The boat looks something like this (details here):

We had a week on the Norfolk Broads last year too. Picking up our boat at Stalham, we stuck to the north Boards. This time we'll probably be going south, towards Norwich and Great Yarmouth.

People have asked about our trip last year, what's possible in a week, where we went, the routes we took, so here for posterity is a post which I started about that trip (but which I haven't finished yet...)
For those who don't know this place, first the basics. The Norfolk Boards are a series of waterways, rivers and lakes, close to the east coast of England, UK - the nearest big city is Norwich. This patchwork is not apparently a natural landscape but a result of intensive digging of peat in the Middle Ages to provide fuel. The empty pits were soon filled by rising water levels and now form a network of over 125 miles of navigable waterways, mostly now for leisure. Along the way there are marshes, reeds, woodlands, many of the UK's oldest churches and lots of windmills. There is abundant wildlife including many rare butterflies and dragonflies, and lots of activities including boating, sailing, canoeing, kayaking, windsurfing, walking, fishing and cycling.

My husband was to be Captain for the week - he has been coming to the Broads since he was a child, at first with his family, then his friends, and then with me. In fact, hubby's parents had so fallen in love with the Broads and boating that they had bought their own boat, much beloved, which they had for a number of years before selling it on. And now we wanted to introduce the children (gulp!) to the joys of the Broads. In many ways the whole trip was a walk (or cruise) through hubby's childhood memories, an old pub here, a new cafe there, and familiar sets of moorings.

[1]  The four of us started off one afternoon at Stalham Staithe, where we picked up the Apollo (I know, they all have names like that!), our Richardson's boat. It's handy now that there's a new Tesco in Stalham where you can stock up, rather than having to stop off earlier at the ubiquitous Roys of Wroxham. After the quick obligatory induction, we sent off southwards down the River Ant, and through Barton Board, where Horatio Nelson apparently learnt to sail.

[2] At around 6.30pm, we decided to moor up at Ludham Bridge. A quick walk up the new gravelly pathway and over the bridge, and about a 10 minute walk to the Dog Inn (yes, I know...no, it didn't have a big car park) for dinner. This place was far more salubrious than it at first sounded. To the front there was a small children's wooden play area - oh joy! We sat outside viewing the distant countryside, listening to the evening crowing, and gazing at the chocolate-box cottages across the road. Inside later, the homemade food (red pepper soup and steak & ale pie) and atmosphere were great, with coral fish tanks and guitars dotted around the place. The kids 'played' pool for a bit in the games room which my husband remembered from years ago.

Back to the boat at dusk (about 8.45pm), and 20 minutes of pixelly BBC news on the dilapidated TV. Unfortunately there was a 40th birthday party boat moored nearby which meant being woken by people frequently walking and talking up that gravelly path, only a few feet from your head! 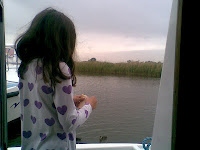 In the morning we popped into the little shop by the Bridge to stock up on breakfast things (there's also a loo nearby FYI - important boating information!). We set off south under Ludham Bridge at about 9.40am. A grey, cold, steely day which you often get on the Broads, perhaps accentuated by the flatness of the landscape. The kids enjoyed feeding the ducks and swans with their duck food purchased in the shop.

[3] We moored up just north of South Walsham Board, and had our English fried breakfast. After a quick explore around the Board, we moored up at Fleet Dyke and decided to go for a walk, despite the ominous weather. Through winding pathways, full waving fields and a country lane, we arrived about 20-25 minutes later at Fairhaven Woodland and Water Garden. This is a 131 acre woodland site with its own private mooring, but we weren't sure if we could have moored there and had a much shorter walk. We decided just to have a quick hot chocolate and cake in the very nice tearooms, rather than purchase tickets and headed back. Rainmacs are always a good idea on the Broads - it just started the spit rain as we got back to the boat, quite a long walk for the kids. A bit of pixelly Carry on Cowboy to try to entertain the weary kids (and adults!) during the ham roll lunch and encourage a siesta - didn't work!

[4] Later we set off eastwards down the River Bure, and then turned left into the Thurne, pulling up into Womack Waters at about 5.45pm, with stern-on mooring at this beautiful and popular mooring spot, just south of Ludham village, with its few small shops and a nice pub. This is a cul-de-sac staithe which makes it especially tranquil, surrounded by tall, billowing trees on one side and a large grassed lawn alongside the mooring (and, yes, public toilets also), though there is a handy small shop off the lawn.  Dinner was in the nearby Kings Arms, a few minutes walk away into Ludham, where you can eat in the pub itself or the adjoining restaurant. Parent info alert: the pub has a small garden with some play things for kids, though much reduced from the huge garden I remember from years ago. That night's Manchester vs. Barcelona football game made the pub a lively place that evening. Luckily we left before Manchester lost. Later back on the boat, we suddenly noticed that the wind, our constant companion for the last two days, had dropped and it was brightening up. It was lovely sitting on the front of the boat with hubby and daughter, son crashed in bed, and a glass of wine in hand, nodding at our boating neighbours, watching the wildlife dart about. Bliss. 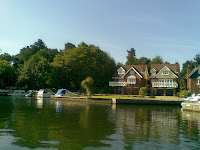 [5] On the Sunday morning we filled up with water and cruised out of Womack staithe at Ludham at about 9.30am. The weather was trying to brighten up, as we motored eastwards and then north up the Thurne, passing some lovely waterside houses. The general 4mph speed limit, to protect further bank erosion, means you can have a good nose, though you try not to peer and invade too much. We reached Potter Heigham before lunch. It's a busy Broads town which meant it was very busy for mooring. We eventually moored up in between the famous Thurne river bungalows. Here you can visit the well-known Lathams store which sells just about everything - we got a 12v phone charger and two pirate hats (for the children, obviously)!

After Womack, next stop Ranworth...will the weather ever warm up? Will we ever get a chance to sketch or read a little? Will either of the kids fall in the water?  You'll have to wait for the next instalment...
Posted by Raven Raven at 00:26 3 comments: