Off to Camp Bestival

Have a great Coca-lympics London.
We are off for five days to Camp Bestival, in the shadows of Lulworth Castle, on the Dorset coast. Mr Tumble and Dick and Dom are on the menu. Us grown ups might get to see the Happy Mondays and Hot Chip. We've only been safe scout camping before so festival camping will be a new experience for us. 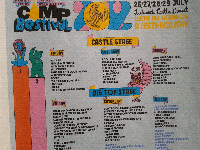 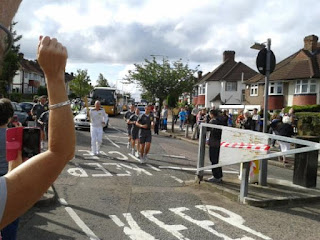 So the Olympic torch came to town yesterday. There was much local hoo-ha - ranging from the agnostic ('reluctantly won over cynics') to the fundamentalists ('barely able to contain their excitement'), and all those in between.

Yesterday morning we watched a cheerful track-suited man run with the torch near the point where Westmount Road meets Well Hall Road (photo left). I'm not sure who he was - there's a list here on the Greenwich site of the torch bearers - so this might be Austin Reynolds?

He was preceded five minutes before by various promotional floats and trucks of attractive youths, waving flags, dancing around and trying to gee us all up. It worked with my children - they even got given some blow-up Samsung batons (now lying pierced and forlorn on the floor). The policemen in attendance caught the jolly atmosphere and were cracking jokes with the crowd. The torch had started in Greenwich that morning and after Eltham was wending its way on to Woolwich. This was the morning's route in the area local to me: 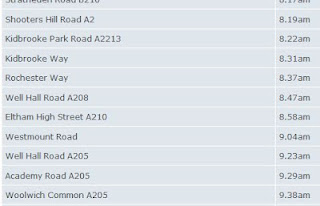 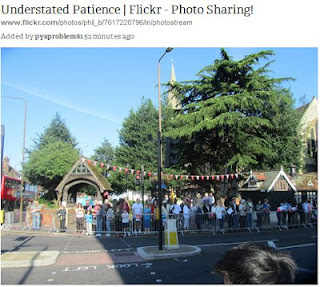 There had been more of a fanfare for the torch on Eltham High Street where there was an official platform party and entertainments - @the286 band (reportedly) and the Greenwich Youth Band (which included my daughter's clarinet tutor!) playing at Passey Place. Here's a photo from outside St John the Baptist Church on the high street crossroads, courtesy of ‏@pysproblem81 - more pics from him here of the event.
Posted by Raven Raven at 18:42 No comments: