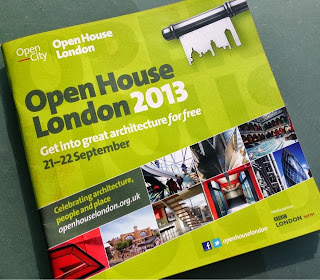 The annual free celebration of London's architecture takes place this weekend, 21-22 September. I picked up this booklet a few weeks ago at the Eltham Leisure Centre where one of the librarians gingerly admitted he had just 'had a delivery' that morning and upon my enquiry handed one over.

There are so many goodies London-wide to visit that in fact it is a shame it all takes place over just one weekend because it would be impossible to do more than scratch the surface. Devotees have, of course, been pouring over the programme for weeks and will have made their bookings ages ago of the most popular and rare places. In fact some are so popular the visitors are even picked by ballot - this year there are four buildings which were run on a ballot system: 10 Downing Street, The View from The Shard, EDF Energy London Eye and Gray's Inn.

The listings in the booklet are organised by borough. There's loads for Greenwich and our neighbouring boroughs, Lewisham and Bexley. You can search through the listings online here. For now, I'll just run through the Eltham entries - click on the headings for more Open House information about timings etc:

p.s. An eagle-eyed reader has pointed out that Crown Woods College is also open tomorrow through the Open House scheme. The official Open London booklet has it listed under Bexley. So, here are the details:

9-form entry secondary school, opened in 2011, organised in three colleges or 'schools within a school'. The architects were inspired by Thomas Jefferson's plan for the University of Virginia which has an open colonnade connecting college buildings around a large central landscaped area. Civic Trust Awards Commended and RIBA Award Winner 2012.