I've kind of lost my blogging mojo at the moment. It happens. Life is busy. The odd quick tweet is easier. Twitter just EATS time doesn't it? Much as I'd like to, I have had to stop trying to read every tweet in my timeline. How do people do that? I guess they have smartphones, which I don't. That would EAT even more of my time.

I am, at the same time, both repelled and fascinated by apocalyptic films. I guess, as the directors intend, the themes in these films bring home the vulnerability and transience of the human race, as well as questioning what it means to be human. It's the themes around how society changes which interest me most - how the usual sociological rules change in the face of different dangers. This reaction in me has only really come on since becoming a parent. The thought of our young children being on their own after the mutated virus has got us, eugh, it's scary. It freezes my heart. I couldn't watch 28 Days Later after the first 15 minutes. Anyways...

I watched one of each of the biological or climate disaster films. In the former category, I Am Legend (2007), with Will Smith in which "Years after a plague kills most of humanity and transforms the rest into monsters, the sole survivor in New York City struggles valiantly to find a cure." [IMBD]. I watched most of the film with my heart in my mouth. It had huge holes in the logic no doubt but it was a powerful film with some poignant moments.

The other night we caught up with what is becoming a modern classic, Danny Boyle's Sunshine (2007) in which a team of astronauts set off on a last gasp mission to re-ignite the dying sun and save humanity on an earth which is darkening and freezing over. Fascinating and, occasionally, baffling. Is the earth worth saving, and is there a higher power? It also includes that common dilemma in such films - should you take a particular action which will save humanity but which will take away from yours personally?

I mention having watched these type of films because, listening to the news recently, it occurred to me that the more imminent threat to society and everything we are used to might lie in another direction. What would happen if the worldwide banking system, capitalism and the money system collapsed? Our usual financial priorities would be subverted and we would be forced to barter goods, food and produce on a different kind of E-Bay or swapping websites? Is there a film which covers such a subject?
Posted by Raven Raven at 09:06 3 comments:

Saturday, 10 September 2011:
Cataclysm: The 1st Catford Festival. Ravensboure Arms. http://thejase.co.uk
“We have comedy from Dan March, Fliss Russell, Jane Deane, and probably more will be added by Saturday. Circus and burlesque performances. Also music from Jimmy Bongos, Enderby's Room, Minarcshe, Tini Houdini and a live band karaoke set from The Sweet Funkin' Association.  It's all kicking off around 2pm. There's a BBQ in the beer garden and entry is free.” from Brockley Central

Saturday 17 September 2011:
1pm to 5pm
The Big Draw
Chislehurst Common (between Manor Park Road and School Road, BR7 5PQ)
Get on your marks to come and join “Our World in Common” to celebrate the 2012 London Olympics. Get set with your passport to artistic adventure and then you’re off around the globe to create traditional crafts and art from each continent. On your journey you can listen to the beat of the African drums, shout with Punch and Judy or be enchanted with fairytales. You can sculpt an Indonesian shadow puppet or make a Hopi Indian kachina warrior, hide behind a Venetian mask or twirl a hand painted Chinese banner.  Go down under for Aborigine dream painting or stay closer to home with golden English brass rubbings of knights in armour. There will be  helium balloons, face painting, a Hog Roast, tea tent and creative adventures for travelers of all ages. Be sure to come early to have a go at everything.

17 and 18 September 2011:
Open House London
Open House London, London’s greatest architectural showcase, encourages the public to visit and tour some of the capitals most iconic buildings. Programme now available with over 760 buildings and events throughout London to choose from.

All are free but many sites have to be pre-booked.

Over 700 buildings are included in the event, including 11 in the Bexley borough. Amongst them:
Danson House, Erith Playhouse and Crossness Engines House.

Tours are being offered around Danson House in Welling on September 18, offering visitors the chance to view the house in its full restored glory.

17 – 24 September 2011:
Herne Hill Festival
Classical, Jazz, and Light music are the staples of the new Herne Hill Festival, which takes place for the first time this year. It combines a number of free events with concerts at £5 each (£3 concessions).

21 September 2011:
Pack of Lies at The Bob Hope Theatre until Saturday 24th September
By Hugh Whitemore.

24 September 2011:
Chislehurst Rocks
11am till 9pm
Free entry
Music for all ages and workshops. Great food and drink, rides, stalls. They are looking for
volunteers + sponsors 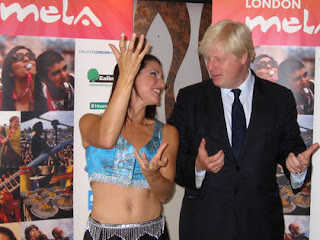 The mela festival season has unfortunately passed me by this year. This is a quick mention though that the biggest of them, the London Mela takes place today, between 1pm and 8.30pm at Gunnersbury Park, which is on the Hounslow/ Ealing borders.

The biggest names performing there today include Jay Sean, Jazzy B and Mumzy Stranger. As you can see, even Boris Johnson. Mayor of London, enjoys honing his skills at the Mela (believe me, 'change the light bulb while patting the dog' does work sometimes...well, if you're an aunty-ji)

BBC Asian Network will be filming the London Mela Main Stage for their BBC TV ‘A Summer Of Melas’ Red Button special. Just press the Red Button on your remote control from tomorrow (Monday 5th September) to watch Mela highlights. For full information go to: www.bbc.co.uk/asiannetwork


See here for my more substantial piece on Asian melas in 2010.
Posted by Raven Raven at 11:12 No comments:

We're back from our annual French sojourn having left Eltham, London and the UK in that surreal state during the disturbances. (I shall hopefully write soon about our trip to Fayence, France...)

The explanations or excuses (take your pick) and remedies about the unrest are in full swing, though it's surprising how quickly the new agenda has moved on already. There's a comprehensive round up here on the 'Dan Cull Weblog' of articles about the unrest - predictions, eyewitness accounts, main and non-mainstream analysis, TV and radio links (including that incredible Starkey interview on Newsnight just as we left to go away).

And today, the EDL are seeking to exploit the general unrest by going ahead with a static march in Tower Hamlets. I really hope that all ends peacefully in the east end today, the police seem to have brought in a lot of resources.

I see changes have been afoot in Eltham. There's a new, lovely-looking little cafe on Westmount Road, the 'Woodnut cafe'. And I hear that the much-beloved Eletriq Cafe is closing and a branch of the chain Prezzo is opening there instead, on 11 Sept? Say it ain't so somebody! There are also some sub-continental goings-on in the Old Greyhound pub - more on that shortly too...
Posted by Raven Raven at 10:49 1 comment: