A project has started which tells the story of an extraordinary place. The 'Southall' in the title is a West London suburb in the UK which, from the late 1950s, saw one of the earliest and large-scale settlement of immigrants from the sub-continent. It also happens to be the town where my parents first ended up, in 1961, having left the green fields of Punjab, India, and where I spent the first 18 years of my life.

The project's aim is "to create an archival, oral and visual documentation reflecting a dynamic heritage...and to create a popular platform that will propel the story of Southall onto a national stage, with the aim of penetrating the consciousness of the British public.". The feeling here is that the community of Southall has made a phenomenal but under acknowledged contribution to UK music, arts and politics.

"Southall is also a place that has come to be affectionately known as Little India, but for many it is much more than that. Being a port, (Heathrow is a stones throw away), Southall has been a home to such diverse groups as the West Indians, Indians and Pakistanis in the 50’s through to the Ugandan Asians in the 70’s. Most recently, new arrivals include Sikhs from Afghanistan and Somalians."

The Southall story is being launched with a series of public events, performances and exhibitions. Things kick off on Friday 24 April, 7pm, with the launch event at the Dominion Centre, Southall: 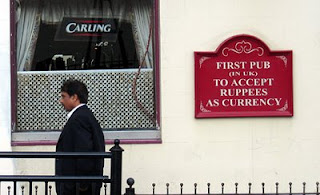 The Southall Story is headed by Artistic Director Kuljit Bhamra and Creative Directors Shakila Taranum Maan and Ammy Phull. Kuljit Bhamra gives his take here. You can visit the website to read more about the project - though it's incomplete in places there's some interesting stuff especially on the pages about Southall''s 'time-line'. It's brought back a lot of memories (see former musing on 1960s Southall cinema), too numerous to write up properly at the moment, but, for now.....

attend primary school in neighbouring Northolt (also known as 'NF country' then); I was also taken by my mother on the march in 1976 following Gurdip Singh Chagger's murder - I have a vivid memory of everyone chanting with great gusto 'Enoch Powell bakara' ('goat') which was obviously a devastating slur! We were also on the march in 1979 which sadly resulted in the death of Blair Peach. In my Southall sixth-form soon after, the school common room would buzz with tales of the NF 'invading Southall' and various of us dashing off to join various groups. It was where we learned about politics and society. Thinking about this period, I came across a great video clip which includes news footage and interviews from the time - it's further down this article on the The Langar Hall site.

I hope there's a lot more to come from The Southall Story - it was a project waiting to happen.
Top two photographs courtesy of David F. Gallagher at lightningfield.com

UPDATE: there's a FREE screening of a film in London on 21 May 2009 about how Southall organised to resist racist and fascist attacks between 1976 and 1981
Posted by Raven Raven at 22:54

Kuljit Bhamra is a talented composer/musician with many a box office hit film score to his name. This has gotta be good.
Love your little insight into 1970s Little India.

After reading your blog with some interest,I feel that the Asians of Southall are making up their own history, or at the very least larging it up. I worked as a window cleaner along the Broadway for a decade or more, and saw many changes.I was present on the day of the 79 riots.Up until that time Southall was not a hotbed of racial tension.People just got on with their lives.I also take great exception to you saying that Northolt where I lived at the time was a National Front stronghold as it wasn't,We were ordinary working class Labour voters. I remember the day of the riot, all that trouble and the death of a person, for what? All because eight to ten misguided fools wanted to hold a meeting,that should have been ignored, treated with the contempted it deserved. The biggest trouble makers were the White anti nazi league,who wound everybody up and then went home and left you to get on with it.Talking to a lot of the younger people next day I asked why they were there, the reply was it was a bit of fun something different.As for the NF invading Southall it never happened a figment of your imagination.White flight has also been mentioned in other blogs.We didn't run away in a panic, it was economic when I got married I couldn't get a council house, and I didn't have an extended family to help me out so I had to move somewhere cheaper.I didn't want to live elsewhere I couldn't afford to stay. In all the years I worked and socialised in the town I only witnessed one act of racism,That was when I was beaten up by four Asians for being out in their town. The only reason I wasn't very badly hurt was at that moment a police car came along.One of the the few times a copper is about when you need one.

I’m not that much of an internet reader to be honest but your blogs really nice, keep it up! I’ll go ahead and bookmark your website to come back down the road southall london restaurants