A Town under Seige: p.s. to the Southall Story 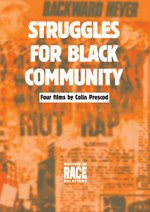 For those interested in my Southall post, there's a FREE screening in London on 21 May 2009 of a film about how Southall organised to resist racist and fascist attacks between 1976 and 1981.

Southall: A Town Under Siege looks at Southall, one of the major post World War Two Asian centres in , and focuses on how this community organised to resist racist and fascist attacks between 1976 and 1981. Southall's militancy had been initiated by community organisations of the 1950s, created to help Black workers combat racism at the workplace as well as to deal with discrimination in the community. And as state racism increased - into areas of immigration control and virginity testing, the 'bussing' of schoolchildren, 'overcrowding notices' in housing, harassment by the police - the community fashioned and forged new weapons of struggle. It was during one of this community's historic moments of defending itself against organised fascists and police humiliation that the young New Zealander, teacher and anti-racist, Blair Peach, was killed 1979. [from TUC poster]

The films form part of a four part series 'Struggles for Black Community', now available for the first time on DVD from the IRR. They were made by Colin Prescod for Channel 4 at the beginning of the 1980s. Free admission event (all welcome). Registration essential. Please either email: sertucevents@tuc.org.uk or call: 020 7467 1220.

More information about the films here where you can also download a copy of booklet which accompanies the Struggles for Black Community DVD
Posted by Raven Raven at 22:10