Another Day Out at London South Bank

Some photos of a lovely day spent on London's South Bank last week:

The children enjoyed the new playground in the redeveloped Jubilee Gardens, in the shadows of the London Eye and the old County Hall building. The swings and trim trail are gone, replaced mostly with wooden climby things. 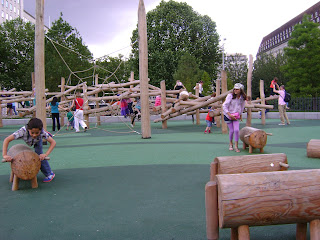 The once-completely lawned Jubilee gardens is now cut by a windy path with planted beds which look very nice. I can't help feeling nostalgic walking here as it always takes me back to the late-eighties when I worked at the then GLC/ILEA-controlled County Hall and would spend lunchtimes on the lawn (when not in the RFH bar or in the Archduke wine bar, the new kid on the block then, nice to see it still there under the arches). 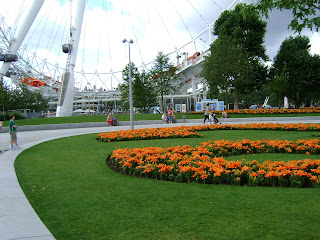 Sadly there was no 'shower room' installation like last year for the kids to enjoy playing in the water. Instead the same spot, on the upper terrace of the RFH, is occupied by a project to build the world in a million Lego pieces. The kids got issued their boards and followed the printed grid - my two got blocks of blue which were obviously going to end up being part of a sea or ocean. We were pleased that when completed they were guided by the organisers to place their boards as part of the Indian Ocean. 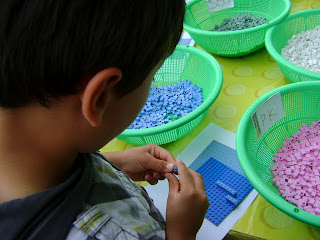 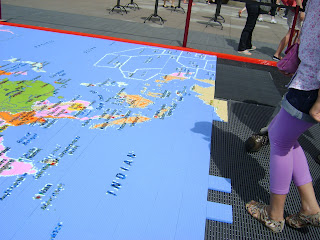 Later on after lunch the children spent ages (and ages!) at the 'Rainbow Park' a long strip of multi-coloured sand along the railings in between the Royal Festival Hall and National Theatre: 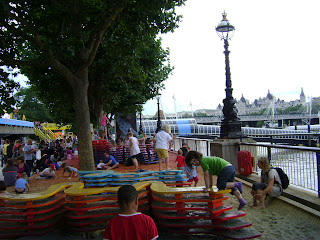 Having finished reading my New Statesman I watched some of the skateboarders and BMXers doing their thing under the Queen Elizabeth Hall. It was here that I spotted some fresh and very topical graffiti art going up, capturing the mood perfectly of passers by - Jess Ennis and Mo Farrah in stencilled spray paint: 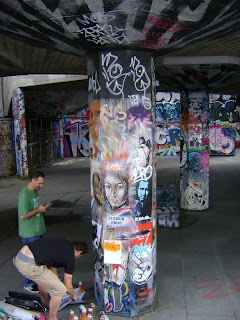 It was hard work dragging the children away from the Rainbow Park for a quick look at the free South African dance performance happening in the nearby Queen Elizabeth Hall lobby. But it was worth it. The performance by 'Dance Africa Dance' and small exhibition were part of 'Ekhaya', a cultural base which the South Africans had set up for during the Olympics: 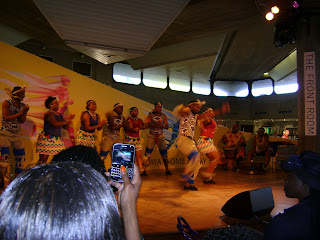 It was here that we were surprised and a bit bemused to find ourselves part of the enthusiastic audience to a surprise visit by a South African dignitary (?the Deputy High Commissioner?), closely followed by the gold-medal winning South African Olympic team! This included their well-known medal-winning swimmer Chad Le Clos, on the right: 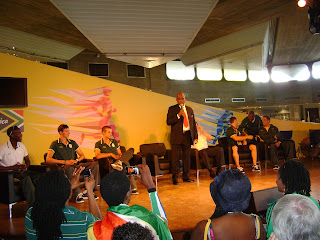 Well, it was the closest I've probably been to so many medal-winners! After listening to some of the interviews and politely clapping their Olympic team, we beat a retreat.

We pootled around enjoying the mime artists, ice-creams, and the carousel. My husband joined us and we decided to take a boat back to Greenwich. Shame that the RFH pier closes at 5.30pm, so we had to cross over the Thames to the embankment pier. During the boat trip I managed to capture the huge riverside royal portrait I'd read so much about: 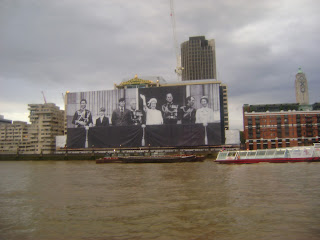 And of course the Olympic rings under Tower Bridge: 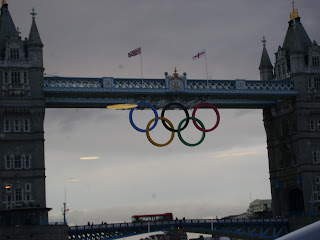 Thanks for knowledge sharing,

Hi! some great posts on here! would love to write a guest article promoting safe driving during the winter months in London - Please let me know if this interests you.

Nice article, thanks for the information.