We had lunch at The Lion pub today, set on the River Darent, at Farningham, Kent. It's a Vintage Inn pub and very cosy it was too. Roaring fireplace, welcoming staff and a nice menu including the usual roasts and even a 'beetroot strudel' for veggies. The 18thC pub is in a lovely setting, with lawns and seating right up to the river where our children have happily waded before in the summer and apparently Charles Dickens has fished for trout. The Lion's staff apparently "could change a team of horses in three minutes!" The 13thC St Peter and St Paul's church can be seen in the background. 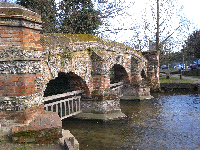 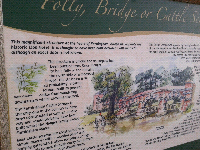 I was intrigued though by this old structure in the stretch of river outside the pub. Historians disagree what it is - is is a remnant of an old bridge? A wealthy man showing off? Is it an old cattle screen preventing cattle from wander down the shallow stream?

There is a board next to the structure which usefully tells us: "It is thought to have been built between 1740 and 1770 although the exact date is unknown. The structure is unique and its purpose has been puzzled over. Once thought to be a folly or the remains of the north side of a medieval bridge, the structure is in all probability a cattle screen, built to prevent cattle wandering downstream whilst crossing the ford.

The Farningham screen is the only one in the country to have been constructed in such an ornate way and would probably have been built whilst the Hanger family owned Farningham Manor...."

There's some interesting information here too by a rambler.
Posted by Raven Raven at 18:40

Email ThisBlogThis!Share to TwitterShare to FacebookShare to Pinterest
Labels: history