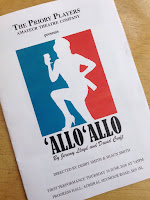 On Friday night we went to see the latest sell-out play by local amateur dramatics company, the Priory Players. The much-loved TV comedy 'Allo 'Allo, part of a three night run, was staged at the Progress Hall, in the heart of the Eltham's famed Progress Estate. That Estate was thrown up to house workers at nearby Woolwich's Royal Arsenal during WWI. However our play was set in WWII, in Nazi-occupied France.

All Brits of a certain age will be familiar with this classic TV sit-com from the 1980s, and perhaps younger ones too who are acquainted with the nostalgic delights of the TV Gold channel.

Here's how the Priory Players described their play: 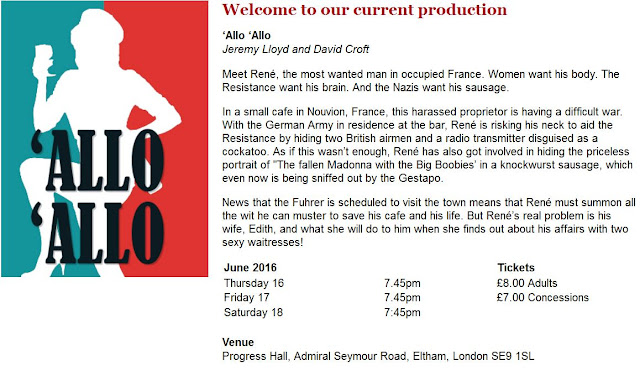 Audiences looking for a taste of the TV programme familiar to them were certainly rewarded. All the ingredients of the timeless Lloyd-Croft penned comedy were present  - cue put-upon cafe owner Rene (check), cue much-put-upon wife Edith (check), cue Brits with terrible French accents (check), cue sausage jokes and the "Madonna viz za big boobies" (check) - they, and much more, were all present and correct.

Martin Cooper-Langham's Rene was especially brilliant and gave the much-loved late actor Gorden Kaye, who played the TV Rene, a run for his money, This was just as well because his character carries so many of the scenes and is effectively a narrator for the play, occasionally breaking the 'fourth wall' to address the audience directly with sardonic observations about his latest conundrum.

Margaret Pace played wife Edith very entertainingly and her musical interludes were very welcome. There was a large cast who were all challenged with having to maintain their various accents throughout - French, German and Italian - no easy feat. There was much audience laughter as the farcical plot was played out, with Rene trying to conceal his affairs ("big breast, big breasts, no I mean big breathes, big breathes!"), and Colonel constantly having to deny he was wearing a wig ("no it is a viglet, a viglet!"). 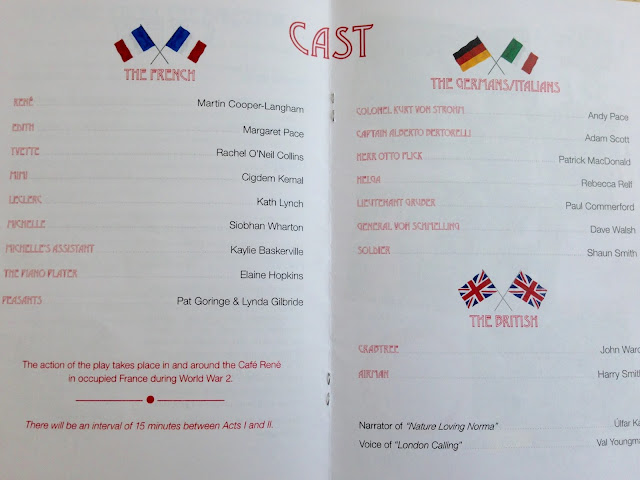 The company had done a tremendous job with the period costumes, but most of all in adapting this multi-purpose community hall (my kids used to attend weekly cubs and scouts there!) for their production. The staging was especially brilliant, recreating the cafe to perfection but also using an ingenious theatrical device (which I won't give away...) to give a very effective visual illusion of characters in bed. 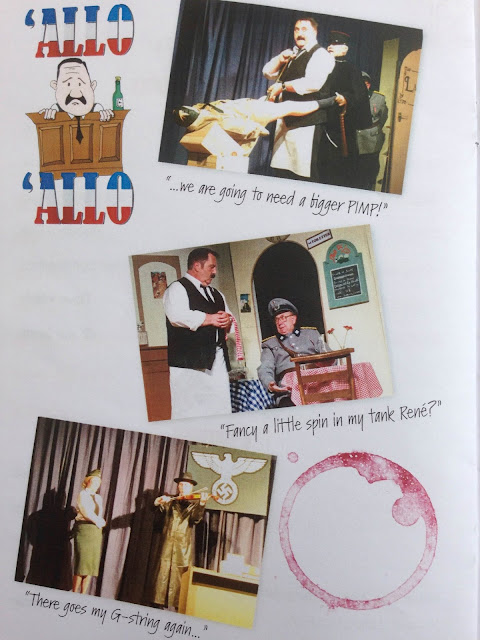 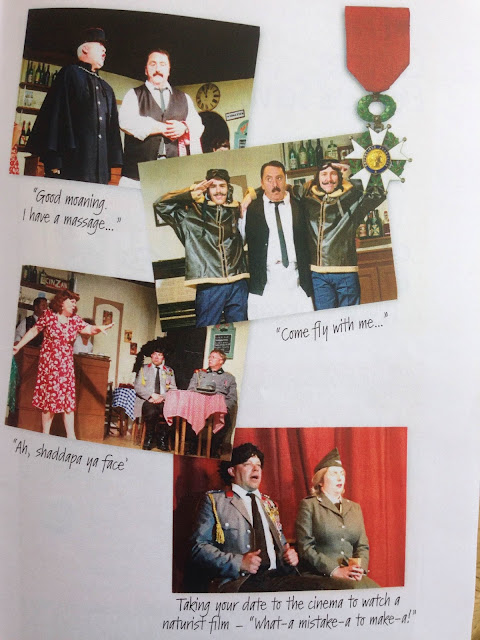 We were all undeniably there for the nostalgia but now the laughter, from many quarters at least, was 'ironic' in tone. For if this much-loved comedy set in the past did not command such affection, the anachronism of the comedy, now viewed through the prism of modern eyes, would surely have jarred.

No-one would now set out to write a comedy full of misogynistic mother-in-law and wife-aimed lines, splattered with questionable 'gay humour' and littered with crude national stereotypes. It is also the clever and utterly daft plotting of the original and perhaps above all, the fact that the humour pokes fun at everyone concerned, and in such an unsubtle way, which means it can still entertain audiences today.
Posted by Raven Raven at 09:09