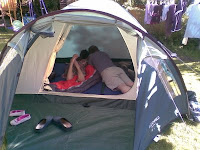 It's been getting pretty hot in the public sphere - what with the general feeling of malaise in politics and the economy (i.e. the tired-looking government, the EU election results and, above all for some communities, what the election of the BNP means and how we should respond.

However, some perspective, people.

With the economic downturn and political storm swirling around us, we carry on, for better or for worse, with our everyday lives, with its everyday concerns. One of the important ones for me is trying to support my family and children, and we've had a busy time of it recently. So I thought I'd share. You know, perspective.

One of the side-benefits of being married to a 'non-BritishAsian' (jeez, what torturous categories, what negative hyphens) - Mr Husband is a 'white Brit' (more laden categories) - is that I get to have loads of 'cross-cultural' experiences. You know, the sort of things alien to a Brit-Asian. For example, all the family sitting around the table at the same time having dinner together instead of the truncated experience of children eating first, then the men and then the women. Another example is going on holiday to places where you have no relatives, not one, none at all. And more than that, staying in a hotel or suchlike rather than in the relative's house. This is bizarre behaviour. But believe me, this is what 'indigenous' English people do.

More recently, the family and I have been - are you sitting down - 'camping' (I can only ever imagine that word said quizzically and in my mother's Indian-accent English). Yes, camping is where you work very hard most of your life to pay for and equip a lovely home with luxurious mod cons (well, we have, er, two TVs) and you leave it all behind to cook and sleep in...a field. Yes, you prepare for weeks as if going on a major Arctic expedition, pack the car full of stuff as if to survive a jungle isolation and basically aim to recreate your mods cons (in portable, foldy-uppy form) by using a gas canister and lots of zips. All this I did, in the name of giving our two young children 'A Memorable Experience'.

The occasion was a family 'fun camp' organised by my daughter's Beavers group (for the uninitiated, that's the pre-Scouts age-group) - yes, I know, I know, having to swear allegiance to 'god and Queen' sticks a bit in throat of an atheist and Republican, and I'm not fond of some of Baden Powell's illustrious record. But children will want to do what their peers do, and I don't think my daughter, at six, was quite ready for the lecture about the terrible evils of the scout group (ok, I copped out). And so we went.

Would I find rabid, jingoistic, grown-up boy scouts amongst the other parents? Would there be group prayers? (God, no!). Would I be the only 'person of colour'? The answer to all of these turned out to be 'non' (not, obviously so anyway).

There was quite a team spirit and a friendly atmosphere. The family to one side were high-achieving Romanians (a banker and a business analyst - I'm such a desi to have picked that up right-away - well, their 7 year old son was interested in my 7 year old daughter! I had to know). Other groups included one or two Indian-looking men, and two black men. However, before we fall over in homage to assimilation (or diversity, choose your poison) each and every one of these guys (and me of course) was part of a mixed-race set up. Hmm, interesting.

There were no promises to love 'god and country' - the single giveaway in this respect was a gigantic, I mean enormous, Union Jack flag silently fluttering over the small facilities building. Slightly unnerving for someone bought up to cross the road when we saw the flag on show (though that was in the mean 70s and 80s in the former-NF territory of the west London suburbs).

I have to say that it was a good communal outdoors experience in a happy and safe environment - what more could you ask for the children?
Posted by Raven Raven at 21:23