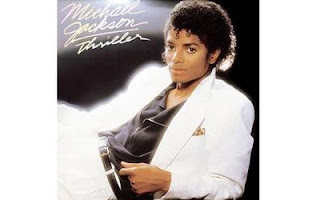 Sad news that's got to be acknowledged. The premature death of a brilliant artist albeit who seemingly lead a bizarre life. For anyone like me in their 40s, Michael Jackson was a constant presence, providing a soundtrack to their life. No doubt he had his critics and, who knows, there may be more to come, but it's hard not to take a moment to mark his extraordinary contribution, as well as some meditations on the response to his death.

As I sit in the morning traffic of South-East London, on this grey and muggy day, I get the opportunity to listen to the blanket playing of MJ tracks on many stations, with stunned presenters and callers. Although I had been shocked by the news late the previous night, and watching the footage this morning, it was when I was exposed to track after track of his back catalogue that my emotional response was heightened. And it has to be said, it brought back memories of the 'Princess Di' moment in this country in the days after her death in 1997. That extraordinary response has, I think, affected the way in which we now react to 'celebrity' deaths. It also made me think about how we respond to the deaths of artist-musicians as opposed to other types of artists. The music of MJ will now have a particular poignancy in a way that the novels of, say Martin Amos or Hanif Kureshi, would not have, I don't think, if luck forbid, they passed away before their time. Part of the answer is of course that musician-artists achieve a 'reach' and celebrity that other types of artists do not.

I also came across an interesting observation at Next Left:

Alistair Campbell recently pointed out that the increasingly autistic British mainstream media can only deal with one crisis at a time. One minute we were all about to be killed by swine flu and newspapers could think of nothing else, the next minute we were up to our ears in the biggest constitutional crisis in the history of Westminster and hamaggedon was long forgotten....Will new media be any different? It could be; Michael versus Mahmood might be the test.

The death of an icon in the the age of 'web 2.0' is already throwing up some bizarre happenings - for example, David Miliband, the British Foreign Secretary, has apparently 'paid tribute' to Michael Jackson on Twitter saying "Never has one soared so high and yet dived so low". [UPDATE: this has turned out to be a hoax! That's why The Telegraph have presumably removed their report and my link doesn't now work (harump). Still, shows the power of the medium - the BBC and The Guardian also reported it...]

I was about to blog yesterday with a lighter post than of late - things seem pretty bleak out there on the economic and political front. I wonder if the public emotional reaction to this sad and unfortunate death will provide people with the vehicle to pour out out their frustrations, albeit in the guise of a grieving reaction. No doubt therapists will have something to say about this - I await Susie Orbach's words or wisdom...

For now though, in keeping with the millions of blogs, tweets, etc. out there, it would only be fitting to share some of my Michael Jackson memories:

1970s - my first memory is of the childish competition in our primary school days between the two cartoon shows of the day - who do you support in The Osmonds versus the Jackson Five? It was always the Five for us.

1989 - A distinct memory of dancing at Fino's (a bar/disco off Oxford Street, London) with my friend L and the rest of the crowd from the ILEA, to 'Baby baby with the high heels on..."

1995 - Attending a spectacular showy Indian wedding (is there any other type?) in Vancouver, Canada, where the stunning bride and groom entered through a flowering archway ( I kid you not) and did the opening dance to 'You are not alone"

1997 - a bizarre scene in Gambia, Africa - the staff of our hotel resort performed a serious enactment in the hotel grounds of the video for 'Remember the time" (they were really good)

Now - My young children never tiring of watching the Thriller video and chanting "Mama-se, mama-sa, ma-ma-koo-sa" (from "Wanna be Startin' Somethin') during car journeys. Hey, it's one route to bilingualism...