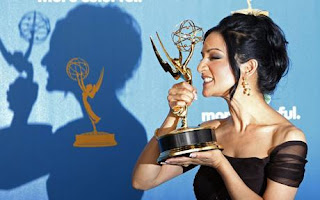 For a while I've had this news saved up...

Last month the London-born actress of Sikh background, Archana Kaur - better known as Archie Panjabi, won the best supporting actress for her role in the The Good Wife, a US series which seems also to have been shown on Channel 4 recently.

I've always enjoyed watching her performances and she looks absolutely stunning at the awards ceremony (but let's not forget, she also has a management degree).

The Telegraph had this to say:


"On an otherwise disappointing night for British talent, Archie Panjabi won the best supporting actress award for her role as the straight-talking private detective Kalinda Sharma in the US drama The Good Wife.

The 38-year-old, who made her name in the British hit films East is East and Bend it Like Beckham, appeared elated as she accepted the prestigious US television award.

She said: "When I started in the business in England, just getting a job was a dream. And to receive an Emmy now is just beyond my wildest dreams.”

Panjabi, whose family emigrated to London from India before she was born, is among only a handful of Sikh performers ever to have won an Emmy.

But she has told how her strict family were less than supportive when she announced her aspiration to become an actress because the profession is considered “lowly” by many traditional Indian communities.“We did have a few arguments because I wanted to go to drama school,” she said previously. “When I was younger a friend of mine’s mother said that this business was only for prostitutes. I thought, Oh my God, do I label myself as that?” But she added that her parents had ultimately agreed to support her ambition on the condition that she went to university first.

Her 2:1 in management studies from Brunel may not have contributed much to her meteoritic success as an actress, but her parents’ scepticism about showbusiness appears to have helped keep her feet on the ground.

Panjabi, who is now married to the businessman Raj Nihalani, said in a recent interview that her favourite pastime is “simply relaxing with a candle and a book,” adding: “simple things are so important because I think in this industry…it’s like being part of a bubble......"

What a familiar scenario - British-Asian girl/boy wants to go into the arts/culture - parents aghast that they'll become a slut/gay/a wastrel and force them to do business/accountancy - kids sticks it out, get the degree then do their own thing anyway (and became Sanjay Baskar or Nitin Sawhney) or else, alternatively disappear into obscurity....weeps gently.

Oh I'm a big fan of Ms Punjabi. I also watch the Good Wife as it has Chris Noth in it. Quite interesting.

I was told to do accountancy by my dad. He said it would let me work from home. At 17, that's the last thing I wanted to do. But now, how I sigh. I could be a SAHM part time and an accountant. Shoulda listened. Then again, maybe I should have gone into acting. Looks like fun.

I must catch the Good Wife sometime.

That was quite far-sighted of your dad. My mum would have approved. Better than all this 'acting-shakting', as she would have put it. Alas, she didn't let me proceed beyond Drama O Level...

That's why I make sure I encourage my kids (daughter esp.) to indulge in all the arts they want (as long as they keep up their other work, of course!) See, some things don't change!

Yes, but I didn't listen to dad and opted for a creative degree instead (though conceded with bus admin like the good little indian I am).

You have a daughter????? Thought you had 2 sons. Mine has decided she's going to fix clocks when she grows up. Who am I to tell her that's crazy.