The Bexley Times tells us:

"Members of a group which has sold over 118 million records were on hand to help unveil a plaque at the venue of their first ever gig.

Status Quo’s first gig at the former Welcome Inn pub in Well Hall Road, Eltham, was marked with a plaque unveiling on Monday which the band attended

This was part of the scheme set up by the organisation which collects and pays royalties to musicians - the Performing Rights Society for Music. Its heritage award scheme was launched last year to recognise the unusual ‘performance birthplaces’ of famous bands and artists.

Status Quo is the seventh band to be given the honour of receiving the permanent plaque at the site they played their first gig in 1967 when they were known as The Status Quo. The site now forms part of Weston Homes’ The Edens residential development." 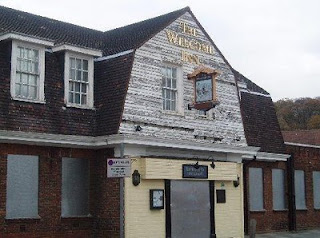 Here is the pub in a sorry state after it was closed following a spectacular fire in 2006, which I remember watching late in the evening at the time. I remember having the odd Sunday roast lunch at this place when it had a Harvester in situ. It was a cosy pub and a nice place to have nearby. There's sadly a lack of such places around here now.

The Lost Pubs project would like to here from you if you have any memories about this pub.

On the subject of Eltham gigs, someone recently told me that they once watched The Who play at the old Eltham Baths in the 1960s, the art-deco-ish building now boarded awaiting re-development into flats. How much nicer than today's stadium gigs.