PM in trouble turns to an old favourite

Wake up today to the BBC headline "Multiculturalism has failed - PM" about "his first speech as prime minister on radicalisation and the causes of terrorism." He is making this speech in Germany, of all places. Perhaps he's trying to impress Merkel given her recent foray. Mostly I'm dumbfounded about his timing - he's making this speech on a day when thousands of people like this: 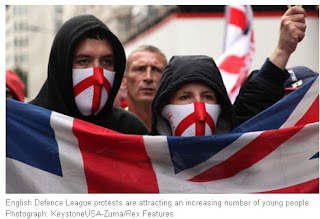 are marching in Luton today, along with right-wing fascists from all over the country. There is certainly a debate to be had about terrorism and the disengagement of young people in all communities, and we'll have to see the full text of his speech later but the constant equation of Islam and terrorism is wrong. And today of all days? (Wonder what the Baroness Warsi will have to say about this...)

Liked these tweets from earlier today:

On a day of the EDL demo when Cameron could have made a more interesting speech abt what binds is together, Tories go back to hectoring tone
anthonypainter Anthony Painter

by sunny_hundal
Oh and as Mr Cameron lectures Muslims today, the EDL will be threatening them with their biggest ever rally in Luton. http://j.mp/dV6cjh

by LewishamNoCuts
Shared British values Mr Cameron? How about the NHS, public libraries, national parks and woodlands and universities for a start?
hangbitch Kate B

And as usual, the government fails to say where Multiculturalism has succeeded. The muslim community has issues true but we are not all muslims in this country. Yesterday when picking up tot at nursery, I was happy to see people from all nations mixing together.
This constant focus on what is wrong with our society is so depressing and in the end will demoralise those who have worked hard to integrate and become part of the larger society.
I also think he skirts past a very important issue...how to define what is English without resorting to the facism of the EDL. There is a lot to be proud of among English people but increasing I think they are not allowed to show that pride for fear of being branded racist. Catch 22 almost.

Thanks Plummy. There's been so much more since then about Cameron's speech, I hardly know where to begin (and actually, as ever, just don't get the time).

On your second point though, I have to disagree. We see and talk of English democracy, history, its institutions, its language and literature All the time and everywhere. Nobody is being branded a racist in these contexts. And quite rightly so. Civic nationalism is practiced and advocated everywhere. It is the ethnic-based and xenophobic nationalism of right-wing groups that is a problem for me.

I agree that there's plenty to be positive about.