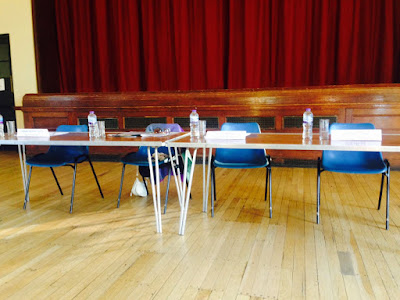 In the keenly-contested marginal Eltham constituency, you would think that the sole hustings would pack a crowd and that all the candidates would treat it as a prime opportunity to address potential voters and listen to their concerns.  Yet the key surprise take-away from the event last Thursday, 1 June, was the absence of Matt Hartley, the Conservative candidate seeking to oust Labour’s incumbent Clive Efford. 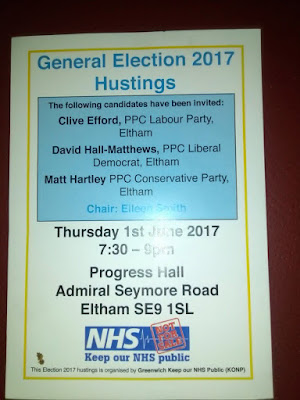 Despite the good intentions of the organisers, ‘Keep Our NHS Public’, and their organisation on the night, of the potential 63k electorate, a small-to-medium-sized group assembled in the Progress Community Hall, Admiral Seymour Rd, in Eltham's historic Progress Estate. As we sweltered in the small hall on that sunny, balmy evening (hard to believe 5 days later with rain and 40mph wind currently lashing outside) I learnt that flyers had been distributed wide and far but there appeared to be little general knowledge of the event. I was emailed a flyer by 'an informant' (ok, my mum-in law) on the Progress Estate before I shared it on Twitter. 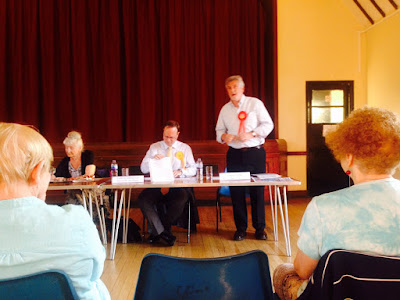 The Labour candidate, Clive Efford (above, right), and the Liberal Democrat PCC David Hall-Matthews (above, centre), took their seats. Calling the assembly to order, the Chair (above, left) made the surprise announcement at the outset that the Tory PPC was unable to make the meeting due to a prior business meeting and that no response had been received to an invitation to send a representative. There were a few gasps, some further questioning about the absence and a couple of people (that I saw) got up and left. The absence was all the more significant because it chimed with observations over the previous few days about PM Theresa May’s reluctance to free debate. It was announced that the previous Green candidate, Ann Garrett, who had stood aside, would take the ‘empty chair’ for the evening.

And then we were off. After opening statements from each of the two candidates, there were pre-written and moderated questions from the audience with free debate and follow-ups. Too long to write up properly now I’m afraid, here’s a snapshot of the topics which came up:


funding of the NHS; halting privatisation; mothballing of parts of the new Eltham Community Hospital;  sale of NHS assets under the Naylor Report; housing problems; alternatives to the first-past-the-post voting system; whether coalition govts work/are good; South Eastern Trains proposals and the current consultation; Schools and how they fared in Greenwich under the govt funding formula; all seemed opposed to proliferation of grammar schools at expense of others; ending of free school lunches; the rise and fall of the ‘Dementia’ tax; more resources to tracking tax evasion; need for improved social and elderly care; involving Parliament into the Brexit process; air quality.

There was a lot of agreement on the panel, and amongst the audience, with some differences of emphasis or method. The older age demographic of the audience led to detailed discussion about social and elderly care in particular and some nervous laughter at the grim suggestion that euthanasia be legalised to give people an alternative to the ‘dementia tax’….

Being the incumbent, Clive Efford spoke articulately about local issues and often passionately about how he would tackle the issues of concern. David Hall-Matthews seemed a fair and decent-minded opponent, though losing his way a little when it got too local ie. at one point referring to Eltham as ‘Remainers’ in the EU ref…  It all made for a pretty lop-sided debate. It often felt as though we were just talking amongst ourselves rather than questioning alternative choices. 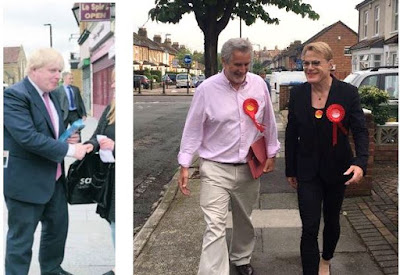 Since then Eltham has had a ‘battle of the blondes’ – the Tories had Boris high-fiving all comers in the high-street the day before while Labour did their rounds the next day with comedian Eddie Izzard.

Nationally this extraordinary general election took yet another unexpected and tragic turn – another horrific attack, this time in the London Bridge/Borough Market area on the evening of Saturday 3 June. I think we’ve all been through the whole of range of emotions since then – shock, disbelief, reflection and resolve - but now election has cranked up again in earnest. Until Thursday/Friday morning then.
Posted by Raven Raven at 14:50