The Eltham constituency has been held by Labour's Clive Efford, with an increased majority of 6,296, on a 72% turnout. 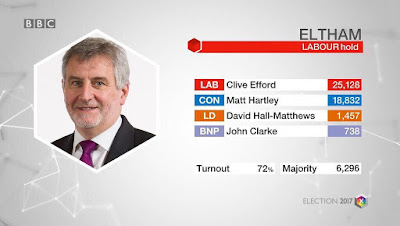 The 2015 General Election results show the remarkable extent of the 2017 outcome:

Despite the numbers once it was known there would be no UKIP candidate, despite misgivings about an unconventional Labour leader and despite the area having a EU leave majority, the incumbent MP since 1997 nevertheless managed to win over Eltham's voters.

The 'snap election' having been announced on 18 April, the Conservatives seemed bright-eyed and bushy tailed announcing Matt Hartley, a locally well-engaged Councillor for Eltham South, as their candidate. After the 2015 election, Hartley had replaced Cllr Spencer Drury (also the previous PCC) as Leader of the Conservative opposition on Greenwich Council. The numbers looked good. May was just setting out on her 'strong and stable' shtick. The polls favoured the Tories by a wide margin. Jeremy Corbyn was being trashed by the press, and few insiders, and Labour seemed the less polished and seasoned performers. 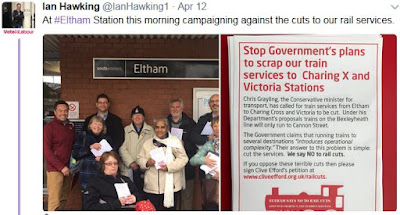 However, Efford's team were straight out of the block the morning after the election announcement, leafleting and talking to voters at Eltham Station. Some commented on the 'Labour machine' but the pic and leaflet above is from the week before the election announcement showing the incumbent MP's engagement with local issues. As it went on, the campaign was marked by upbeat numbers of volunteers turning out, many for the first time, including from neighbouring safer constituencies.

The local Conservatives frequently got in their big guns - Chris Grayling, Priti Patel, Boris Johnson - and seemed buoyed. The strapline 'Standing with Theresa May' featured heavily on local leaflets by the pro-Brexit candidate.

With the 'Maybot' theme ringing increasingly more true in the face of May's refusal to debate, the scripted repetitive answers and the various u-turns especially on social care, it was also the polls which slowly began to look 'weak and wobbly'. The focus and momentum of campaigning altered with each of the terrorist attacks, moving away from Brexit and on to security.

Locally, a hustings event took place in Eltham on 1 June without the Conservative candidate or a representative, leaving only the Labour and Liberal Democrat candidates, and the audience, to disagree amongst themselves with Tory policies and proposals without actually hearing from him. It all added to the growing impression, led from the top, that Tories were not willing to show up and debate.  At this meeting and elsewhere, Efford's messages on opposition to education funding cuts, local train service cuts and sale of NHS assets were striking home.

In his acceptance speech during the small hours - opening with, "Well, rumours of my demise were greatly exaggerated" - (well, surely he's allowed that...), he gave a coherent speech about why he thought the results went the way they did. Commenting on his view that the government had taken people for granted, "there is only one set of people who run this country and that is the British electorate." Acknowledging that he had had differences with his party leader, he said that the Labour Party had put forward a truly radical manifesto and set of policies and that people respected the decency that had been put at the heart of British politics.

Efford went on to say that respect was due to the Greens who had stood aside in this constituency and that he would honour that decision. On Brexit he was committed to ensuring that Parliament was sovereign and had a proper say in the final outcome. You can watch the results come in, and the speech here:


I'd ended my post on 30 May with Harold Wilson's oft-quoted observation that a week was a long time in politics. And so it has come to pass. 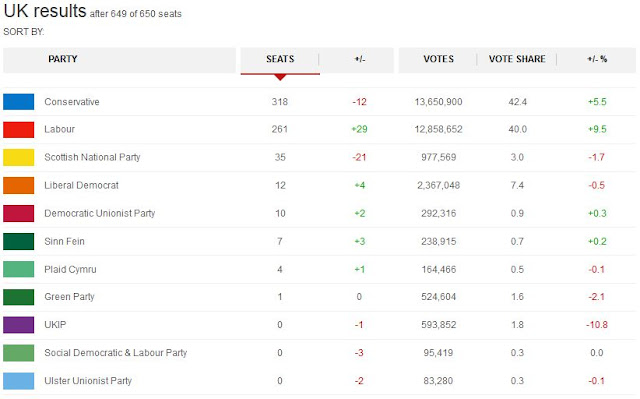 The national 'hung parliament' result has led, as of today, to May intending to form a government to lead the UK "at a critical time" working with "friends in the DUP." So, as numerous others have pointed out:

Who would have guessed the ending of the 'third act' in our bizarre play?