The Play’s the Thing: Changeling Theatre’s Hamlet at Severndroog Castle

A lot of things happened in 1997: Blair brought Labour back from the wilderness, the death of Princess Di unleashed mass hysteria, UK band Radiohead unveiled their iconic OK Computer album and …erm, I started working at Goldsmiths.
But something else happened too. A small Kentish theatre company put on its first ever production, Moliere’s Tartuffe, at Boughton Monchelsea Place, near Maidstone. Now, twenty years later, The Changeling Theatre have begun touring their latest outdoor-theatre production, that most challenging of Shakespeare’s plays, Hamlet, directed by Rob Forknall who has directed every Changeling show. 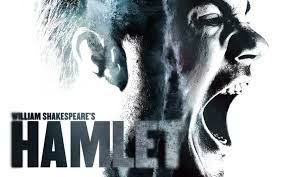 In last Wednesday's (19 July) evening open-air staging of Hamlet, Shakespeare’s longest and most quoted of plays, the backdrop of the towering Severndroog Castle, deep in South-East London’s Oxleas Wood, provided a fitting substitute for Elsinore, the Danish royal castle which quietly broods over the tragic play.
The woodland setting’s intimacy immersed and enveloped audience members in the play’s action. Similarly, the evening breeze rustled the leaves of the surrounding ancient trees in eerily-timed accompaniment to the wandering Ghost of the late King Hamlet.


The story of the troubled prince struggling to deal with grief and revenge in the Danish court, the Changeling Theatre's production triumphantly succeeds in that most difficult of conundrums – just how do you solve a problem like staging a long philosophical tragedy, with few laughs, in a summer outdoor setting? The answer is… brilliantly.
The production features an excellent cast, creative use of music and scene transitions, and a clever combination of period and modern costume. The modern world is also referenced in other witty anachronistic touches – e.g. two characters pausing for a photo ‘selfie’ on their way out of a scene; and the ‘mad’ Hamlet expressing his mock-demented state by gleefully sticking stickers on another character’s back, enlisting the help of a nearby cross-legged child audience member.
Another interesting interpretation was borrowing from cinematic visual techniques (only sparingly though - relax!) in which we had the characters on stage suddenly moving in dramatic slow-motion before casually coming back to ‘normal speed’ again.

The talented young Manchester School of Theatre-trained actor, Alex Phelps, convincingly carried off the famously dense rhetoric and discourse of Hamlet’s many soliloquies including the Bard’s most famous lines:
“To be or not to be – that is the question:

Where 'tis nobler in the mind to suffer
The slings and arrows of outrageous fortune
Or to take arms against a sea of troubles,”
(Act III, Scene 1)


However the audience, and Hamlet, were enjoyably teased when it came to another set of well-known lines. The supporting characters persisted in throwing around the skull, interrupting Hamlet several times from completing his lines:
“Let me see, Alas…”(*)
and then only later allowing him:
“…poor Yorick! I knew him Horatio. A fellow of infinite jest, of most excellent fancy.”
(Act V, Scene 1)
(*sorry, I may have mis-remembered the exact break-point here…)

Despite the play’s serious content, the cast created a charmed and relaxed atmosphere with one of the characters even camply chivvying people back from the interval with, “Come on, come on, hurry up, it’s my big solo!”
And was it my modern feminist imagination or were there some ironic snorts and gasps at the lines?:
“Frailty, thy name is woman!
……
… a beast that wants discourse of reason
Would have mourn’d longer”
(Act I, Scene 2)
when Hamlet is berating his not-long-widowed mother for re-marrying so soon after her husband’s death. Hamlet’s mother Gertrude is played very engagingly by multi-talented LAMDA-trained Sarah Naughton (in action, photo below) who also excellently doubles-up later as a comic bawdy character. 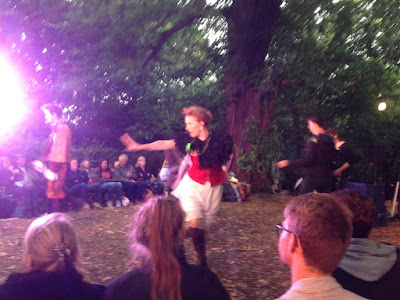 The professional cast also contributed to the excellent ‘soundtrack’ to the production, arranged by Alex Scott, with many of them taking up various stringed instruments and a clarinet too.


It may well have been “madness”, sitting there in a darkened wood at 10pm on an English evening, “yet there is a method in’t” especially for such an engaging, witty and intelligent production.
(Act II, Scene 2)

This highly-recommended production continues at various venues around London and Kent ending in the grand setting of Pembroke Castle, Wales, on 30 August. Tickets obtainable from the Changeling Theatre website.