6th anniversary of the invasion of Iraq 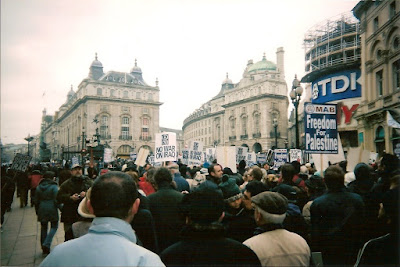 I'm a day late in posting my acknowledgement of the 6th anniversary of the US-led invasion of Iraq. On 20 March 2003 the bombs started raining down on the people of Iraq in this misguided 'war'. People were fooled by the US coalition, which included the UK, into believing that the war was necessary was because of Saddam's 'weapons of destruction'. In the end, defeated by the 'dodgy dossier' debacle, they settled for 'regime change'. In February 2009, true to his election promises, Obama announced his plan to withdraw all combat troops from Iraq by August 2010. Let's hope the Iraqis themselves can work towards filling the various power vacuums.

There's been surprisingly little about this anniversary in the UK press -the BBC has a jaunty piece about the "pigeon fanciers of Baghdad" and "how they have managed to keep up their passionate pursuit through the darkest of times". Interesting, though hardly reflective of the suffering involved and anger about this invasion.
Many tens of thousands of Iraqis have died in this war (the precise number is contested), as well as over 4,000 military personnel - you can read the American Huffington Post's take on this here.
France24 tells us that "Neither the US military nor the Iraqi authorities have announced plans to commemorate the March 20, 2003 invasion that toppled President Saddam Hussein, an anniversary marked only by anti-war protesters and hastened US pullout plans."
Interestingly, France 24 goes on to quote Tariq Ali, a Pakistani-born, British-based author and activist, speaking about the supposed success of the recent surge of US troop:

“I think basically what the US did in Iraq was to buy off the opposition. Large numbers of people who were fighting them, especially from the Sunni section of society, were paid a lot of money and partially given control of their towns,”

Doesn't bode particularly well for the future.
Micheal Moore gives us a piece about veterans reflecting on their service, including one former U.S. marine who, home after a tour in Iraq, has taken to taking cover under the kitchen table every time local fireworks go off. 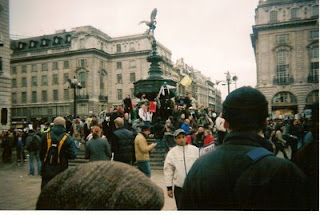 Before the invasion, I remember in late 2002 to early 2003 the growing anti-Iraq rumblings building up following the terrible 9/11 attacks in New York. When the prospect of government action started looking serious, I remember joining the largest ever number of street-protesters in the UK . This was when hundreds of thousands of people (again, figures contested) took to London's streets for a three and a half mile march to demonstrate their opposition to military action in Iraq. The march was organised by Stop the War Coalition, the Campaign for Nuclear Disarmament (CND) and the Muslim Association of Britain. 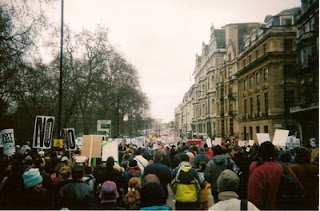 The photographs in this post were taken by my husband and I on that bitterly cold day, Saturday 15 February 2003. They show views of the march by Trafalgar Square, Piccadilly Circus' Eros and heading north up Park Lane towards Hyde Park for the rally.
Alas though, our display of 'people power' had no effect at all because just over a month later, in a complete disregard for public opinion, the invasion began.
Posted by Raven Raven at 21:10