Coming out about Bollywood

Why would any sane, thinking, educated person be attracted to 'Bollywood'? Well, this is a loaded question - it encodes all sorts of assumptions about this genre and neglects to appreciate its multi-layered offerings (which are even more multi- if you are a Brit-Asian). Frankly, it's a bit akin to the 'Big Brother' bashers - I mean, if you're interested in people, social relations, personal and identity politics intersected with media behavior, programme editing and 'celebrity', then surely BB is a dream!
I have always been intrigued by popular Indian cinema (or 'Bollywood', the western-friendly name to have emerged over the last 15 years or so). When I was a child it was the art form (the only one as far I can remember) which enthralled my mother's generation and class in the UK. In between double-shifts at factories, canteens and plants, these Indian immigrants in the late 1960s/early 1970s would eagerly dress up (beehives, mascara, pale lipstick and saris) and head off to the local cinema which some Indian entrepreneur had rented for the big Saturday night. For us this meant going to 'the Dominion' in Southall, West London in the UK, a town which had a concentration of Indians and particularly of Punjabi Indians.
My brother had

I only had then a basic, developing, knowledge of Punjabi but still we managed (mostly) to follow the Hindi dialogue of films such as Andaz, Hare Rama Hare Krishna, Bobby, Pakeezah, and Sholay, classics for which any Indian will be able to reel of a fair amount of dialogue They were magical but strange nights. Stepping out of our English, weekday selves, my brother and I entered a world which was completely alien to our assimilated personas at school. So that's one relationship I have with Indian cinema.
Later, in the age of affordable domestic video players, cinema-going diminished amongst Brit-Asians in the late 1970s though viewing films remained popular. In my teens now I was more interested in creating some space between my tastes and that of my parents' generation. Trouble is, there was very little British-Asian 'youth culture' about (But that's the subject of another blog...).
Skip to the present, and Bollywood is my connection with my 'imagined community', as I now live in a pretty much non-Brit Asian world. Apart from the usual fare, I particularly en

joy the relatively more 'left-field' stuff especially films which have something to say about society and politics; films such as Hazaaron Khwaishein Aisi ('A thousand dreams like this') (Dir. Sudhir Mishra, 2005) - this film follows its three protaganists in the 1970s against the backdrop of the Indian Emergency, and India's massive social and political changes, including the Naxalite movement in South Bengal. A gratuitous picture of Shiney Ahuja here, one of the film actors - another good reason for watching this film (ahem...). 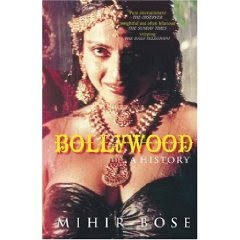 If you want to know more about popular Indian cinema you could do a lot worse than to read Mihir Bose's Bollywood: A History (2007). Despite it's cover (blimey!), it's actually a very comprehensive and readable gallop through Indian cinema, right from the first shaky and silent black-and-whites right up to the early 2000s.
So that's the explanation of my 'guilty pleasure', though I think some of the films are crossing over into 'world cinema' and would easily be the subject of a 'western' film buff 's trip down to the BFI. But I make no excuses (well, just a few...) and need no endorsement, honest. I'd like to hear some of your recommendations from Indian cinema. And I may from time to time tell you about what I've been watching. So, kaan khol ke sunlo.... ('open your ears and listen' - a much-used formulaic line from Bollywood).
Posted by Raven Raven at 21:55