Dis-Orienting Rhythms: the politics of the new Asian dance music 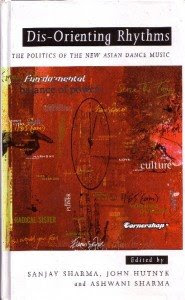 For anyone interested in the British-Asian music and cultural scene up to the mid-1990s, here's a quick mention of a book now available to download on the web here or here (or below). It's being made available "to celebrate the landmark edited collection being published over a decade ago".

Dis-Orienting Rhythms: the politics of the new Asian dance music (1996, Zed books), edited by Sanjay Sharma, John Hutnyk and Ash Sharma.
“This book writes back the presence of South Asian youth into a rapidly expanding and exuberant music scene; and celebrates this as a dynamic expression of the experience of diaspora with an urgent political consciousness. One of the first attempts to situate such production within the study of race and identity, it uncovers the crucial role that South Asian dance musics - from Hip-hop, Qawwali and Bhangra through Soul, Indie and Jungle - have played in a new urban cultural politics …” (Back cover)

This book was the first of its kind as far as I'm concerned, giving attention to a particular lived cultural reality of many second-generation Asians. It came out at a time when we were surprised to find that being Asian could be kinda cool (at last, we had received the permission of the west to be fashionable...). After the thirsty years of trying to appropriate 'black' music as ours (after all, which London British-Asian didn't follow jazz-funk and lovers reggae in the 70/80s?) this seemed a time of plenty for '2nd-generationers' - there was the music (Bhangra), dedicated newspapers (Eastern Eye) and cable channels (Zee TV) galore. But be warned, this book is more than a nostalgia-trip - it grapples with some serious concepts, connecting music with race, identity and political consciousness.

So what does the book cover? These are the chapters in the book (downloadable here as pdfs):

So enjoy this book, though be warned it is steeped in Cultural Studies and Anthropology-speak and needs a bit of attentive reading.
Posted by Raven Raven at 21:57