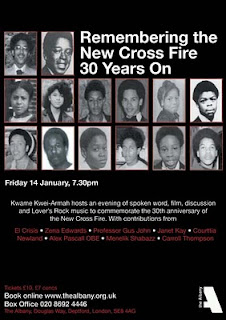 "On Sunday January 18, 1981 a devastating house fire killed 13 young black people during a birthday party in New Cross, South East London. The black community accused the London Metropolitan Police of covering up the cause, which they suspected was an arson attack motivated by racism. The protests arising out of the fire led to a mobilization of black political activity, but nobody has ever been charged in relation to the fire.

Kwame Kwei-Armah hosts this event to mark the 30th Anniversary of the New Cross Fire incorporating music, film, spoken word and discussion to remember the young lives lost and the impact the New Cross Fire has had on the lives of Britons today.

See the The Albany website and the 21stcenturymanifesto blog,
Posted by Raven Raven at 08:42

I believe that all the evidence points to the fire starting inside the house and that the racist atatck theory has been discredited. At the second inquest in 2004 the judge recorded an open verdict and said:

"I have concluded on the totality of the evidence that...while I think it more likely than not that the fire was begun by deliberate application of a flame to the armchair near the television...I cannot be sure of this"