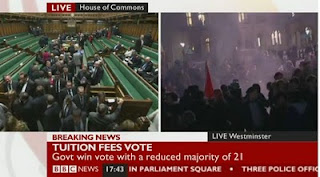 That's it then, as if there was any real doubt.


Parliament has voted by 21 votes to raise tuition fees at English universities to a maximum of £9,000 per year.

In the second vote, MPs voted on measures aimed at protecting access for poorer students to universities charging more than £6,000 per year. It's just been passed with an identical majority of 21.

It's been quite a ride for the last few weeks. Students and other people have felt very strongly about the raising of tuition fees, but those that work in universities are fearing the other less publicised impacts - the cutting of public funding for universities and particularly for the arts and humanities. More on that later.
Posted by Raven Raven at 18:01