No trains out of Eltham today

Well, at least we were told this morning - no trains out of Eltham!

Sounds like Southeastern Railway have been listening a bit. They've been criticised roundly for the lack of information to commuters (eg. see the 853 blog)

I see that yesterday Clive Efford "slammed" them in the House of Commons. (Do broadsheets ever use this verb, or is 'slamming' only done in the tabloids/local?) From the News Shopper:

"Eltham MP Clive Efford is the latest person to criticise the way Southeastern has handled the snow, particularly the lack of information given to passengers.

Across the area, commuters attempting to catch trains have been met with boards that displayed no train information while others have complained about the lack of staff.

Mr Efford told Transport Secretary Philip Hammond to “get a grip“ on the situation.  He said: “What I want to hear from him is what he's doing to the train companies to make sure they give up-to-date, accurate information?"

Mr Hammond said the lack of information was “inexcusable” and the Office of Rail Regulation would be investigating.The company was widely derided back in January after snow caused the same problems." 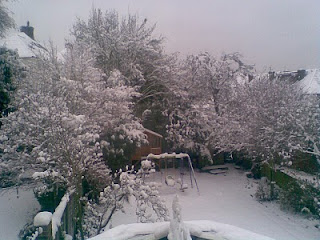 Winterwonderland in the back garden 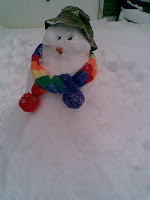 My children's work of art, goes by the unusual name of Frosty
Posted by Raven Raven at 08:33

I don't know about you, but when people start referring to "stakeholders" (as in the News Shopper story), my bullshit alarm goes off...

I agree - it's that corporate/PR-speak you find in defensive statements.