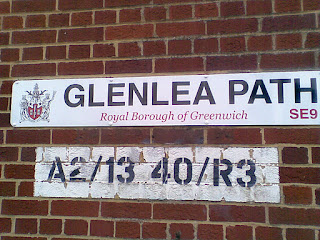 What's this? We don't become a 'royal borough' until the weekend and yet I spied this road sign this afternoon which is a bit ahead of itself. It's the road leading into Eltham station, so presumably was given a bit of priority over the others.

The Greenwich website has details of the events around the borough to celebrate the borough becoming 'royal' from this weekend.

This follows the announcement originally made two years ago that:

"Her Majesty the Queen has bestowed the status of Royal Borough upon Greenwich, to take effect in the year of the Diamond Jubilee in 2012...The honour is bestowed in recognition of the close links between Greenwich and Royalty, from the Middle Ages to the present day. It also acknowledges the borough’s global significance as home of the Prime Meridian, Greenwich Mean Time and a UNESCO World Heritage Site.

There are at present three Royal Boroughs: Kensington and Chelsea, Kingston, and Windsor and Maidenhead. They all reflect longstanding Royal associations."

Events are taking place in Greenwich, Woolwich and Eltham. Here's the blurb from the Greenwich website about the events in Eltham, on Saturday 4 February:


"Eltham will be hosting the festivities across three venues on Saturday 4 February.

The Eltham Centre will have musical performances throughout the day, and the library will hold a drop-in crown-making workshop from 10am until 4pm. The Letters Patent will be on display.

Eltham Palace will be open from 10am until 2pm, with a whole host of royal activities. There will be a falconer, interactive performers, hobby horse jousting, Tudor confectionery and workshops for children. Tudor musicians will entertain and Henry VIII will lead the dancing.

A black poplar, given to each of the London boroughs by HM the Queen to commemorate the Diamond Jubilee, will be planted at Well Hall Pleasaunce at 2pm.

The evening festivities will begin at 5pm at the Tudor Barn in Well Hall Pleasaunce. There will be a stage with musical entertainment and outside food and drink stalls. The musical firework finale will be at 6pm.
Posted by Raven Raven at 23:36