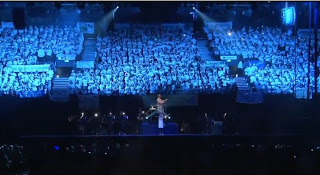 Well, yes they did. But more importantly, my 10yo daughter tonight performed at the O2! She joined her school choir to perform as part of Young Voices, an organisation which brings children together to sing.

It was an incredible performance of over two hours long which brought together over 7,000 (!) primary school-aged children to sing together, alone and also to back up other artists. There was a Monkees medley, a Queen medley, they backed The High Kings for Qaudete (the haunting latin Steeleye Span track), and Randolph Matthews for a stirring version of Labri Sifri's Something Inside So Strong. Apparently, Beverly Knight was a guest the night before.

It was all very high energy, with great lighting orchestration and with the children waving their torches, stomping feet and doing 'wavy arms' at the right times.

But it was by singing with 11 yo Connie Talbot (apparently the Britain's Got Talent 'singing sensation') that tonight's Young Voices choir achieved the world Guinness record for the largest number of backing singers (at 7,310!). The Guinness adjudicator was there to judge and declare the results. A BBC crew were also filming. The place went wild.

It was a tremendous evening, and a real tribute to music teachers who enter their pupils for this event and then rehearse them for months. We got home very late with a very buzzing daughter. Thing is, we are buzzing too. Now where is that order form for the DVD....
Posted by Raven Raven at 00:26

WOW!! Well done Raven's daughter (and the other 7309 of course).
What a lovely occasion that must have been.

Looks like an ultimate performance! It must be overwhelming to see our young ones altogether singing powerfully. englandtriptips.com

And a clip of the choir alone doing their 'Pop Medley' here:

Only the most dedicated fans might want to home in on 4.42mins!

Oh well, what's 969 between friends?
I must be dedicated cos I've watched the youtube clip several times. Lovely!