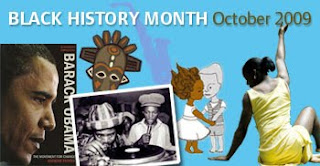 October heralds the onset on Black History Month in the UK. This month (or so)-long collection of events, talks, and performances started in the UK in 1987 but has its roots in the American beginnings of this event launched in 1926 as Negro History Week.

Some knee-jerks leap in each year with the reaction 'what about white history month'? This gang are usually synonymous with those who think that all immigrants are getting houses, jobs, benefits etc... Are they kidding? We live in White History Life. Turn to the History Channel, look at the overwhelming majority of any school syllabus, look at government funding of the majority of cultural and artistic organisations look at politics, look at...need I go on? And maybe that's to be expected, that's life, life is eurocentric - or at any rate, those with power are. But when some small-minded people object to one measly month of wonderful activities, mostly for families and many for free, then I've got to defend BHM.

BHM also has its detractors from the 'liberal centre/left' who argue about the further 'ghettoisation' of black people, and that such demarcations continue to mark black people out as different and maybe detracts from where the real fight is - for example, see Deborah Orr's scathing piece a while ago in the The Independent ('Why we should bin Black History Month: It's wrong for all the reasons that multiculturalism more generally is wrong').

Here I'd argue that BHM was started because of a lack of knowledge and understanding about the culture and history of a people. The question is, has that been achieved? Perhaps as soon as black people’s contributions to history and culture have been fully incorporated into text books, and into our national awareness there may no longer be a need for a Black History Month. That time has not yet come and so the need still exists. 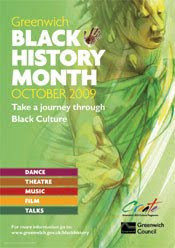 then you've also got the 'what about 'insert ethnicity' month' gang. Sure, one might ask what about 'Asian/Chinese/etc. History Month' - but then, frankly, go ahead and organise something! In London at least we have loads of events including the art, culture and history of different ethnicities and many people enjoy them. Personally, I think that'd be overload. The point about BHM is that it has long and particular roots. Many BHM events, of course, have a wider definition of 'black' that others and do incorporate other cultures, e.g. British-Asian. I know the definition of 'black' is not straightforward. But life if messy - let's enjoy that messiness.

Frankly, if there were a 'white history month' (though I'm not quite sure how that would be conceived, what's the narrative?) that was welcoming to everyone and not jingoistic, then bring it on, I'll be there. After all I'm a member of English Heritage (btw, a part govt-funded organisation...) because I want to enjoy many aspects of history and culture. But I also want to enjoy BHM. There's room for everyone. At the risk of sounding corny, that is multi-culturalism at its best.

So here's the Lewisham and Greenwich programmes for BHM - enjoy.
Posted by Raven Raven at 23:25

Been thinking for a few days about Black History since the Greenwich whats on mag dropped through our door.
Since moving to south east london my view of a certain group of black people, Africans,has changed detrimentally. Just the day to day experience of them in Plumstead makes me feel I don't want to know them personally, let alone their history. I realise that this is negative and I do try to change that view but each positive encounter is ruined with about 10 negative ones.
So my interest in BHM is low and I think that generally the people who could, perhaps, benefit from greater understanding (inc myself) are probably those most likely not to go to any of the events. Even when I attended events at the Royal festival hall I always used to find that the audiences were middle class people who did need to learn anything about the Black history.
Further, as we drove through Eltham yesterday and I marvelled at some of the large gorgeous houses, I couldn't help but remember this is where Stephen Lawrence died. I wonder if Eltham has changed at all in the 16 years since that horrid day and whether BHM has done anything towards that change.

Hey Plummy, that's unfortunate you've had such negative experiences. I can only say that's not been my overall experience - there's good and bad everywhere I guess.

As to Eltham changing - racist murders occur all over Britain, and the group of boys who killed Stephen Lawrence exist on many estates all over the country. Eltham is no different than a hundred suburban towns - it's just that the majority of racist murders don't make it to the national press - see this site, for example.

BHM cannot carry the weight of changing murderous behaviours - that is the sole responsibility of the murderers. Events of different cultures can only be a source of pride, education, and fun - I, for one, am happy to join in with that.

A very postive and intelligent response Raven. :)
Also thanks for the link which makes for depressing reading. Of course, I know there is racism everywhere, even North London where I have lived most of my life. All I meant was that as I drive through eltham I'm always reminded that behind the nice facade lurks evil.
I'm hoping as I live here more, I'll learn to forget the bad and concentrate on the good as you seem to do.

Thanks. I know what you mean though about driving through scenes of past notorious crimes - driving past that Eltham bus stop still makes me think each time.

"Here I'd argue that BHM was started because of a lack of knowledge and understanding about the culture and history of a people."

That is my problem with this, the idea that black people are "a people". I think this is a very American notion and one that seems regrettable; at least, one which does not belong in Britain.

In my view, black people are not "a people" and neither are white people. It seems to me divisive and potentially dangerous to see the world in these terms. I am with Deborah Orr on this one.

Hi peezedtee - thanks for dropping by.

Yes, BHM did start in America where the 'black' referred originally to the then-'Negro' and now African American people. I think they were a specific 'people' - ones who were forcibly transplanted from one country to another and therefore developed a specific history and culture in response to those conditions.

The 'black' in BHM in the UK referred, I think, originally mostly to African-Caribbean people, who had their own shared experiences of colonisation and immigration. I agree that there is some artistic licence in the use of 'black' in BHM - but it would make for a cumbersome title if specific ethnicities were described!

I think the event is of value for both internal and external reasons. Internal, because seeing something of yourself reflected around you (in education, culture, media etc.) contributes in important ways to self-worth - this is especially important for young people. It's important for people to be able to feel positively about the differences which distinguish them from others - not so that they think they are 'better' or anything like that, but to be able to understand themselves better. It's better than running around with a lot of angst?

It's also a good for the obvious external reasons, for helping people to understand, appreciate, enjoy even (!) each other. And, you know lastly, anything which exposes the public to more history and culture (in these celebrity/reality tv dominated, dumbed-down culture days) has got to be good, hasn't it?

It's for these reasons that I also welcome other similar educative celebrations - eg. Gay Pride. These can be important focussing and fundraising events.

The world is already divisive and potentially dangerous - I see BHM as trying to help close that gap. Maybe more needs to be done on highlighting this message during BHM.

Despite the impression I've given in my hastily-written post, I'm not actually that wedded to a specific BH 'month' - as long as the opportunities arise sufficiently and positively elsewhere and throughout the year. I'm not sure that they do yet. So maybe we're not that far apart, if I read you correctly? I've gone on far too long, but couldn't say it any shorter!
Peace, Rx

If we called it "Caribbean History Month", that would be fine. (I should also, in that case, like to see a "Yorkshire History Month" to "help me feel positively about the differences that distinguish me from others".) What I find objectionable is the use of "black" to embrace virtually any kind of ethnic minority -- even the Chinese are "black", apparently, on this view -- as though everyone is to be defined primarily by the mere colour of their skin. Surely this just plays into the hands of racists who want to push the crazy notion that people of different colours are different species?

Sorry, that was sloppy, replace with "help me feel positively about the differences that distinguish me from others, differences which have been used as the reason for lynchings, denial of property and voting rights, and various other assorted attacks on my self-worth."

I think 'whatever we call it' history/culture-highlighting-events can only (or should focus on) precisely showing how we are all of the same species, albeit dressed up in different clothes/music/foods etc. I see it in anthropological terms.

I imagine the Yorkshire Tourist Board has a programme, and I'm sure it's very good!

Yes, so I hope do the Caribbean countries' tourist boards, but that's not the point. "Lynchings, denial of property and voting rights" are things the Americans did to their slaves and former slaves. British treatment of people in the Caribbean and elsewhere once left much to be desired, but we have not been lynching them or denying them the vote since they came here, and it is an very different kind of "black history" from the USA version.

I do clearly acknowledge the American roots of BHM but I still think there is are sufficient reasons (many of which I've listed earlier) for simiilar events in the UK.