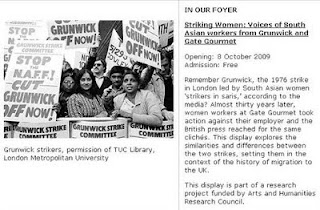 I was sent The Women's Library listing of upcoming events. The Library, now part of the London Met University, has a great programme but one event struck a chord - a display and discussion about the Asian women involved in the 1976 Grunwick and the 2005 Gate Gourmet strikes.

These events may hardly now register in the national memory but to the Asian community, to unionists and west Londoners they were big news. Each of the strikes, of course, had its own historical place and theme. Grunwick was an early example of action by minorities and making the trades unions pay attention whilst Gate Gourmet, an example of more modern themes of displacement by the next tier of immigrant labour, and a multi-national company playing legal footsie. But each resulted in a rarely seen phenomenon in the media - groups of Asian 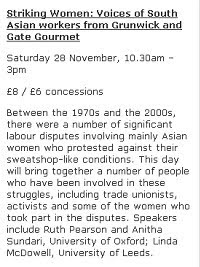 women standing up for their rights.

A personal connection is that my mother had worked for Gate Gourmet, though she had retired some 4 years before the strike. She was one of the many Asian women who had worked for British Airways for decades and was then transferred across when BA outsourced its catering to GG (and the catering's never been as good since!). It should be an interesting day on 28 November.

See here for booking details.
Posted by Raven Raven at 21:53

I remember that Gourmet Gate strike being on the news and being absolutely amazed that Asian WOMEN were striking. I worked for a while in a factory in Greenford where most of the lines were run by Asians (of which the majority were women). I admired them a lot. They also reminded me of mum who worked in factories for years before finally, and thankfully getting a job in a shop where she was treated better ...though all her life she woke in the mid of the night to go to work which would be unthinkable by her children today.

OMG my auntie worked in the Nestle factory in Greenford for years. They were certainly a plucky and stoical lot. I'm glad your mum was able to move on. Thanks for reading and commenting. Rx