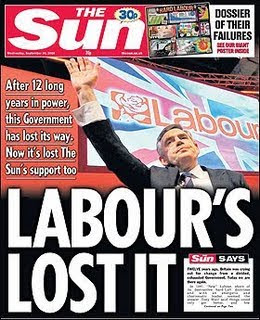 And just before I clock off, this awful news has broken:

Sky News has reported that the Sun newspaper has endorsed the Conservative Party. Adam Boulton describes it as "another nail in Gordon Brown's coffin."
(credit: Red Rag)

That is going to give the Tories a real lift at their conference. The power of Murdoch at work again.

Update: the BBC now has this on the role of The Sun in election victories (just to rub it in...)
Posted by Raven Raven at 00:03