I shall post a 'listen again' link when it's available [now here at 15.39 mins in]. This is what my email said from Newsnight earlier this evening:

"...it is ...a question that is still unanswered 30 years after the death of a teacher in another London demonstration.

His name was B 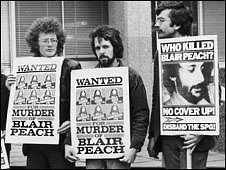 lair Peach and the Metropolitan police commissioner has finally promised to release the findings of their investigation into his death after keeping them secret since 1979.

It was widely reported at the time that the inquiry recommended charges be brought against individual police officers. Tonight, for the first time, the inspector said to have been a prime suspect speaks about his role in an exclusive report from Peter Marshall."

Marshall has just asked the inspector "did you kill Blair Peach?" "No, no way, I didn't" he said. He's now Dr Alan Murray, an academic, sounding quite sincere and plausible. On the other hand, surely the death of an innocent, peaceful person on a march needs to be accounted for?

The findings of the Met Police investigation will be made public "by the end of the year".

My previous post on Southall and the death of Blair Peach here and the BBC summary, including a clip from the programme here
Posted by Raven Raven at 22:57

I am an artist making a project about Southall which will be exhibited in a major warehouse exhibition organised by London's Departure Gallery on 10th-13th Dec 2009. I am inviting people to email me info/opinions/images/media inspired by the location of my project, which is in a warehouse on an industrial estate in Southall, west London. I would really like you to email me something to include in the project.

Everything I receive will be exhibited together in a sculptural way and will be labelled with the sender's name. Everyone involved will be credited in the exhibition catalogue. Please respond asap (by 1st December).

This is a great opportunity to showcase your ideas about the local area and to get involved in an interesting project. It need not take much time.