Sikh schoolboy in row over 'kirpan' 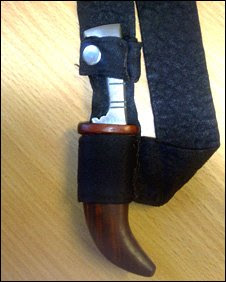 This is the big 'identity politics' story in London at the moment, being picked up everywhere:


"A Sikh boy has been withdrawn from a north London school after he said he wanted to wear his traditional dagger.The boy, 14, was told not to carry the 5in (12.7cm) kirpan at the Compton School in Barnet after governors ruled it was a health and safety risk. Under Sikhism the sheathed scimitar is one of five "articles of faith" that must be carried at all times."

It's being debated all over the media (esp.the LBC Radio station right now). In haste now, might write more later...how can carrying a knife in school be justified?