Legitimisation of fascism: 'The genie is out of the bottle'* 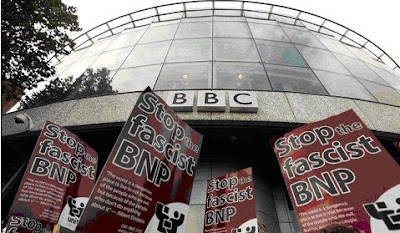 Well, it's over. I think many will breathe a sigh of relief over the relative pummelling that Nick Griffin got on the BBC tonight. He showed himself up with his cod 'ice-age' history and frankly offensive claims that America's infamous KKK was a non-violent organisation! The panelists did well, with some of them very well-prepared. However, on balance I have to agree that the BBC did not have to have NG on Question Time itself - it could have discharged it's 'duty of balance' through its news programmes eg. Newsnight, as it has done already. I think having NG on such a 'news entertainment' programme does add legitimacy to the BNP. Yes, I know close to a million people may have voted for them, but then again, Hitler was elected once too and look where that ended. The BNP are a party which a sizable percentage of British people cannot join because of the colour of their skin (its proposed constitutional change to allow non-white people to join has yet to be agreed and enacted) and which, if elected, would constrain the rights of people (to jobs, to housing, etc.) on racial grounds. It wasn't a good move to have him sitting up there with the big boys and girls. I think the BBC can only have been playing for ratings.

Finally, for more detail, a couple of links to some live blogging and comments on the programme: the New Statesman and BobfromBrockley (*title quote here from the Statesman blog by Mehdi Hasan). And here's the iplayer link to watch the programme.

[Morning update: depending on what you read or watch, it was either a triumph showing up fascism or it was a lynching and has created sympathy for the underdog. But, hey, sometimes you are the underdog for all the right reasons and deserve not to win.]

It's unethical and pretty childish, but damn, this is good: a mashup video of what Griffin meant to say: