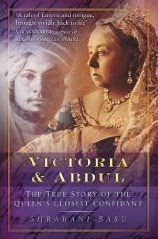 I've been reading about a new biography which adds further to the intruiging connections between Victorian Britain and colonial India.

Victoria and Abdul is Shrabani Basu’s biography of a servant, Abdul Karim, who became an influential and, often an apparently disruptive, adviser to Victoria on India, “a good looking, extravagantly dressed servant…hated by the Queen’s household both for his race and class”. 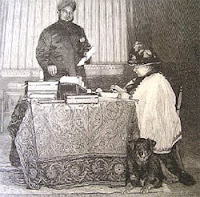 Abdul Karim arrived in England from Agra when he was just 24 years old. The one-time clerk at Agra Central Jail found his way to waiting on tables during Queen Victoria's Golden Jubilee. He was soon installed as a personal attendant to the Queen, becoming a powerful figure, instructing her in Urdu and Indian affairs. The timing was just right. The 'munshi' arrived to fill the gap left by John Brown's recent death, the Scotsman with whom the Queen had developed a close friendship. Of course, Karim was turfed out of the royal court by jealous courtiers within a week of Victoria's death in 1901.

The connection between the Queen and Karim is an intruiging one especially given the Queen's dalliance earlier in her life (all innocent of course) with another Indian gentleman - the last Sikh Maharaji, Duleep Singh, which I wrote about last year. This biography promises to be fascinating.

Victoria and Abdul, by Shrabani Basu, published by The History Press Ltd, due out Mar 2010.

oooh another to add to the wish list. This looks interesting.

Wow, thanks for this. I didn't know about it. I have always been intrigued about their relationship. The correspondence between them was destroyed. It will be an amazing book to read and I look forward to it. He was a key link in Victoria's interests in India.

It does on the face of it seem an unlikely friendship doesn't it? Was all the correspondence btwn them really destroyed? I thought I saw somewhere on the web some letters between them, esp. one in which Quen Vic signs as his 'mother'.

I also remember a rather good Channel 4 dram-doc on Queen Vic in 2008 which was about all the different men in her life, including Abdul Karim.

Thanks for the review.
I run a bookshop in west London and we are hosting a talk with Shrabani in March. All the details are on our website
http://www.thetravelbookshop.com/
Do let me know if you would like to come.