Should Sikhs wear kirpans in school? 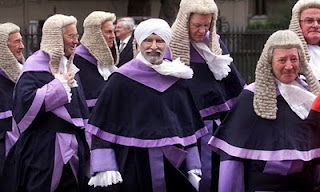 Britain's first Asian judge Sir Mota Singh says Sikhs should not be banned from wearing kirpans to school or work.

Sir Mota was raised in Nairobi, Kenya, before coming to England in 1954 to complete his studies in law.He joined the English bar in 1967 and made headlines with his appointment to the bench in 1982 when he wore a white turban in court instead of a wig. [Photograph: Peter Macdiarmid/Rex Features from The Guardian website]

Sir Mota Singh QC is being quoted widely in the UK press and blogosphere today, following his interview on BBC Radio 4 this morning - you can listen to that interview here.

The kirpan is a small ceremonial daggar required to be worn as an article of faith by every baptised Sikh, under their clothing. Although Sikhs carrying the kirpan are exempt from prosecution under the offensive weapons act, it is believed that objections about the ceremonial dagger have increased following the September 11 attacks and instances of knife crime. There have been some recent cases of schoolchildren who are baptised Sikhs, not being allowed to wear their daggar to school - I wrote about one such case last year.

"I see no objection to a young Sikh girl or boy, who's been baptised, being allowed to wear their Kirpan if that's what they want to do," said Sir Mota."I wear my Kirpan and I've always worn it for the last 35 to 40 years, even when I was sitting in court or visiting public buildings, including Buckingham Palace."

I'm not sure what has triggered Sir Mota Singh, now retired, to speak to the BBC at this time - he didn't refer to any particular case going on. According to which paper or blog you read, opinion seems divided about whether kirpans should be allowed - I think the balance of (non-Sikh) opinion is probably in favour of their not being allowed - mostly on safety gounds but also, as you can imagine, on the 'it's one rule for 'them' and one for us' grounds. You can read comments on the BBC forum on this issue here - though frankly the tenor is generally quite depressing.

My family background is Sikh though I am an athiest and now only a 'cultural Sikh'. Growing up within that community in London I have known lots of baptised Sikhs who quietly wear their kirpan without any fuss. I also know how much it means to practicising Sikhs. On the other hand I can also see the problems about daggars in school in a country where the carrying of a kirpan is not fully appreciated. On balance the suggestion of daggars welded into their sheaths seems to me a good compromise. Though, on the third hand (!) I can see why Sikhs wouldn't be happy with that - what do you think?
Posted by Raven Raven at 23:30

An athiest and cultural sikh...interesting terms. I must admit most sikhs I meet are very much into their religion so it surprises me to come across one who isn't.
There have been sikhs in this country for years and I cannot imagine they haven't worn their kirpans all that time. And you know what, growing up in North London and also going to uni in Birmingham there were often major clashes between Sikhs and Hindus but I never heard of knives being used.
But the times are different now with a lot of our youth being killed by the knife. So even though religious tolerance is to be applauded, I have to agree with those that think we cannot have one rule for some, and another for others. Of course that's my personal experience...not quite an athiest but very much a cultural hindu :)

There are plenty of 2nd and 3rd generation Sikhs not into religion! Perhaps obviously more so those living 'out' of the community than in it.

On knives, you're probably right - especially as I think that Sikhs, even quite devout ones, can be quite flexible about these things.