An embarrassment of riches

You wait ages for a good British-Asian female writer/director to appear on the British cultural scene and then two come along at once.

Aswell as Bhatti's play Behud ('Beyond Belief') starting in London in April, Gurinder Chadha OBE's latest film, It’s a Wonderful Afterlife, also opens here in April. Of course the origin of the artmaker does not matter other than the fact that you're bound to get more diverse material - I mean which non-British Asian is going to be writing about abuse in Sikh gurdwaras or ghostly goings-on in a Hounslow-based family?

Chadha's latest film tells the story of a British-Asian mother (Shabana Azmi) whose obsession with marrying off her daughter (Goldy Notay) has hilarious results. As the potential suitors meet their sticky ends, policemen Mark Addy (The Full Monty) and Sendhil Ramamurthy (Heroes) are brought in to investigate. Other actors include Jimi Mistry, Sanjeev Bhaskar and Zoe Wanamaker. 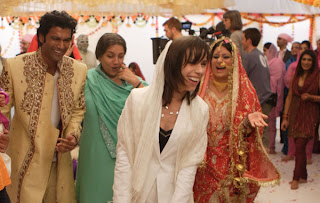 So the film is a comedy with some ghostly and afterlife themes. I like the way that the film poster (above) apes the style of the huge Bollywood hoardings and yet the film title is clearly a play on Frank Capra's 1946 film It's a Wonderful Life - very fusion. Chadha, director of films such as ‘Bend It Like Beckham’, ‘Angus, Thongs and Perfect Snogging’ and ‘Bride and Prejudice’, has said that Wonderlife is a film "that in many ways takes me back to my warm intimate family values of Bend It Like Beckham. I shot in the same Indian-centric localities of London.” By that she's presumably referring to the areas around Hounslow, in the west London suburbs. Critics have said that the film delivers what is expected, with all the usual ingredients of a Chadha film - frankly, that sounds good to me.

If you'd like to attend, or watch online, a free event next week at which Gurinder Chadha will be speaking about her latest film, here are the details:

It's a Wonderful Afterlife opens in the UK on 21 April.

The London premiere takes place at the Odeon West End, Leicester Square, on April 12; a 'regional premiere' on April 14 in Birmingham at Vue Star City.
Posted by Raven Raven at 16:37