Can the progressive British Left learn to love football? 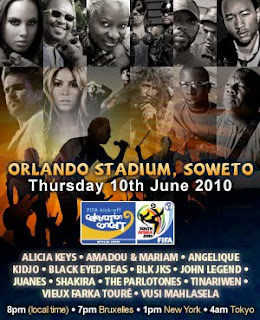 I'm sitting here having come across the opening night concert for the World Cup - one of the performances was John Legend dueting with Angelique Kidjo on a cover of 'Move on up', wow.  Other acts included Shakira, Alicia Keys and Black Eyed Peas.

While thinking about football, I remembered the piece this week by Gary Younge which touches on lots of interesting points about which team to suppport in the World Cup if you're young, British and black. For him "as a young black boy in 1970s Hertfordshire, English patriotism was inextricably bound up with far-right politics and racism, not least in the beautiful game." Lots of his points struck a chord with me - I remember my brother (we're brown, Brit-Asian btw) playing football in the 1970s, in Northolt (a north-west London suburb) only to find that the next day, some of his seemingly-friendly white 'team mates' would be be rolling with the NF skinheads trying to catch him and spit at him. Younge seems to have made peace with football and has found a way of suppporting England which makes sense to him. And actually my brother is a big England supporter now. Though if India (or Barbados for Younge) were in the competition (fat chance), what then? Let's not go there - I'm sure the coalition govt would come up with some test 'a la Tebbit' once they'd finished teaching spouses English.  Read Younge's article here.

As a counter to Younge's piece reconciling himself to supporting England, Laurie Penny has written today on why she despises the world cup - "Who cares about a bunch of misogynist jocks tossing a ball around? Football is commodified nationalism that excludes more than half the population."  She makes a lots of points with which that I totally agree.  Just because it's easy to target Penny as a 'humourless parody' (in the words of some knee-jerk commentators) does not mean that her points have no validity - the point about the South African women's football team player having been raped and murdered is a deadly serious one.
Posted by Raven Raven at 23:39