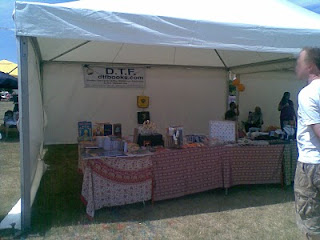 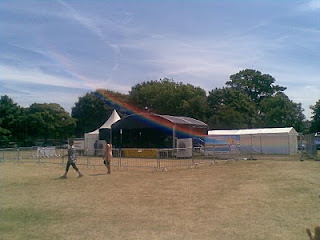 Well, managed to pop down to the Woolwich Mela in the sweltering 31c heat. It was on Woowich Common off Ha-Ha Road, south-east London. We got there about 11.30am - it was advertised from 10am, with 'children/women's activities' (I kid you not, like they are the same thing!) supposedly taking place at that time until noon. I'm afraid we found little going on apart from people quietly setting up.  Granted that there was lots of promise in the air, with the music stage (photo above left) banging out some rocking bhangra tunes (as they say...) and food and book stalls (above right) being set up, but I think they went for too early an opening time.  We were approached by a rather keen young man, in shirt and tie (poor thing) eager to sell us some private education tuition for our kids - I wonder how many bookings they'll make with the stereotypically keen Indian parents.

Anyhows, we left after about 45 minutes - having paid £4 for the kids for the bouncy castle and then some more for ice-creams for us all. At least the bouncy castle man was all sorted with a flat screen TV to watch the England vs Germany World Cup game later at 3pm (it was 4-1, ouch..) I expect it did liven up in the evening with the live acts but we had to get to a family birthday party and so couldn't get back later which was a shame. Must try to catch some live music at another mela this summer - try this list to pick a festival near you.

There's a review, in a similar vein, of the Woolwich Mela by another South-East London blogger with Indian roots over at Plummy Mummy...
Posted by Raven Raven at 23:17

Oh how pants that we didn't meet the times both of us were there overlapped.
I also really wish I'd gone to The Tudor Barn thing...wanted to see the art. Have you ever been to the barn's cuban nights? If so, are any good?

That was a shame, wasn't it. We weren't actually sure about going until the last minute (you have one so you can imagine how long it takes to get two kids ready and out the door...). Did you see the women having wacky races carrying baskets of fakes flowers on their heads - it kind of makes sense in India but seemed a bit bizzare in Woolwich! I think that constituted the women's activities! God it was hot that day.

I haven't been to anything in the evening at the Tudor in the last decade! Cuban nights sound good though and I'd give it a try (if hubby can guarantee getting back for the kids)