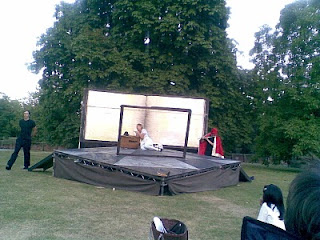 "’Twas brillig, and the slithy toves
Did gyre and gimble in the wabe;
All mimsy were the borogoves,
And the mome raths outgrabe."

Alice from Alice through the the Looking Glass

What's the most perfect thing you could be doing one hot summer evening in SE London? Sitting on beautiful lawns, surrounded by an ancient Palace on one side and rolling gardens on the other?  Rug spread out groaning with goodies to eat and chilled pinot grigio to drink?  Children laughing and happy, and about to be exposed to some fine, guilt-alleviating culture?  (Husband also happy and beaming!)? Yes, well that's what we did last night. 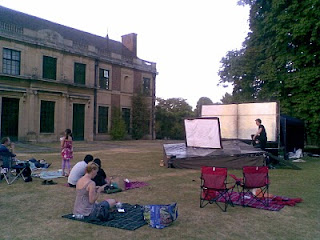 We went to see an open air production by the Quantum Theatre, of Alice through the the Looking Glass, set on the south lawn of Eltham Palace.  It was absolutely magical. The play was performed beautifully by a cast of four people, with a minimal and inventive use of their few props. Alice was played by Northumbria University-trained Holly Manning. They were all so talented.
The performnace started at about 7.15pm and ran for about 1 hr and 50mins. The tickets cost us £40 for 2 adults and 2 children.  It was well worth it. The curious thing was that this production last night played to only about seven groups - it felt like a private performance. It was a pretty under-advertised event. Hubby and I love the festival season because it allows us to enjoy outdoor live music and theatre, with our children and without the bother and worry of arranging babysitting (even if we had a list of known babysitters, which we don't...)
The Quantum Theatre was founded in 1993 by Michael Whitmore, who also created this production of Alice. Apart from touring in the area (and far beyond) the Theatre company itself is actually based in Plumstead at The Old Button Factory in Bannockburn Road. It is also touring with Great Expectations. More details on their website or on tel 020 8317 9000.
Posted by Raven Raven at 23:59

What a breathtakingly brillig blog, Raven. Your pace and range outgrabes my feeble efforts. How do you find the time to gyre and gimble with the best of the bloggers? I need some advice + inspiration to improve my mimsy blogging from the isle of wight. Please do keep checking out my scribblings - all best, Nisha www.nishapillai.com/blog)