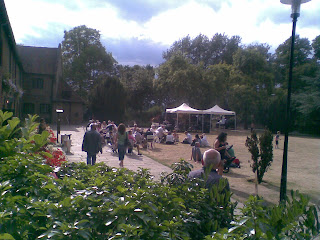 Faced with the dilemna of so many events in Eltham yesterday, we ended up visiting the live music at the Well Hall Pleasaunce. We saw the Espree Band, featuring Suzie B, play under a gazebo on the Green in front of the Tudor Barn (photo left).

They were good - playing the usual classics one might expect at such an event and for a middle-aged, suburban audience. One track that caught my attention though was a kind of latin rendition of 'Summertime, and the livin' is easy...". The keyboard player clearly enjoying playing with that one. The singer was lovely as were all the band who a funny rapport going on (including finding it hilarious to end some of their numbers with the 'Countdown' theme tune (C4 quiz show), for no obvious reason). When a bride and groom strayed into the grounds for wedding pictures, the guitarist joked that they'd like to dedicate a track to them - "Boz Scaggs' Why did you do it?" (sic), a slip because that track was I think actually by Stretch. Instead they aptly played Stevie Wonder's 'Signed, Sealed, Delivered'. A lovely afternoon.

Live music continues at the Well Hall, Tudor Barn on each Sunday afternoon, between 2-4pm, up until Sunday 22 August.

Click to check out other Eltham/Greenwich Events & Places
Posted by Raven Raven at 23:02